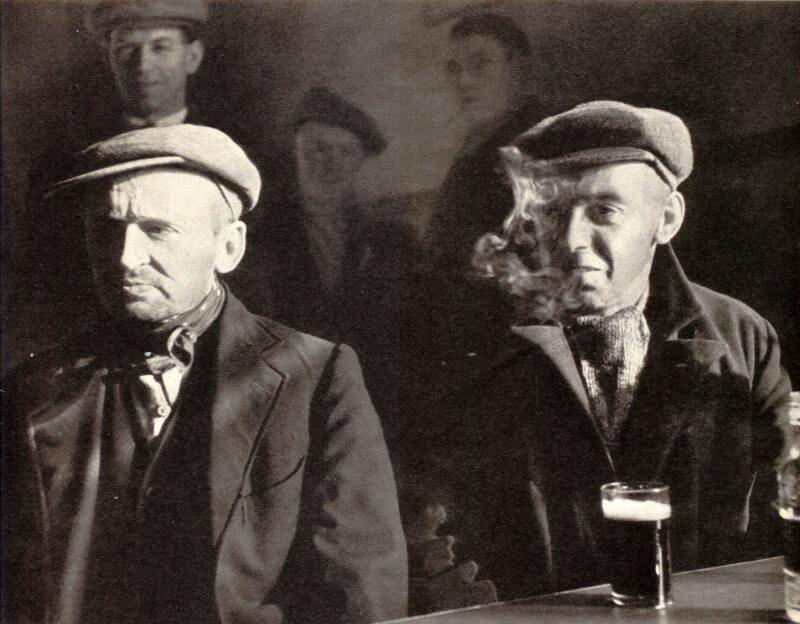 THE FACES OF WIGAN'S WORKERS : Men Whose Fate is Linked with Coal and Cotton
Early in the 19th century their great-grandfathers went down to the pits and their women found work in the mills. To-day, ten out of fifteen mills, seventeen out of forty pits, are closed. In a town of 85,000 people, 9,500 men and women are unemployed. But the man in the pub is still friendly, still confident that pits and mills will open again - perhaps after the war.


Three visits by our cameraman completed the story of Wigan. Its name is a joke to millions. To 85,000 people it represents the realities of life. It is a life hard, often grim, faced with courage, humour and resource.

This is a story with a moral - a moral for democracy, a moral for 1939. We sent our cameraman to Wigan for the first time early this year. We could not use his pictures before summer came, changing the landscape. In August we sent a man up again. Before we could use the pictures, war had come. At a conference the other day we decided the pictures of Wigan were one of the best sets we had in store. War was bound to have brought changes to Wigan. A cameraman and a journalist were despatched to Wigan to record them. They were not welcome. "Why have you come to Wigan?" they were asked. "Why not to Preston, or to Warrington?" They were called before the Chief Constable, asked to account for themselves. Wherever they went, they were followed by detectives. Of the pictures already taken, some, they were told by the Chief Constable, "might be of great service to the enemy." They were pictures of Wigan slums. Though the pictures previously taken were left in the Town Clerk's office only on the clear understanding that this was for purposes of checking, and all were to be returned, in fact a considerable number of prints were retained and not returned in time for press at all. An unofficial censorship had been established. Only the pictures the authorities liked might now be taken. Only the prints the authorities liked were to appear. If we had not retained the negatives they would have been the only ones which could have appeared. Out of regard for the mass of ordinary Wigan folk we have taken no notice of the conduct of their officials in preparing these pages. We have made them exactly as we should have done in any case. But we think it right that Wiganers should know these facts. We think it right to ask the question: "Is Wigan part of a free country? Has Wigan some dictators of its own?"

Well over a million pounds have been spent, since the War, in improving Wigan's amenities and appearance. Ugly nineteenth-century shop frontages in the main streets have been replaced by elevations in "Tudor" style. The trams have been abolished and replaced by a fleet of modern buses. Derelict patches of ground have been reclaimed and laid out as gardens. More than two thousand council houses have been built, and, say the Council, "practically all" the slum dwellings abolished. Nearly the whole of the educational facilities have been reorganised on model lines.