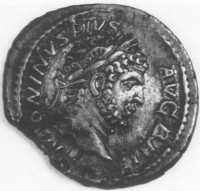 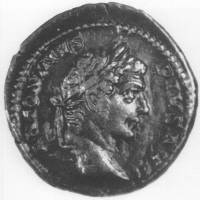 Two from a hoard of coins discovered near the Boar's Head Inn in 1926.

The Romans built a fort on the site of Wigan and called it Coccium. The settlement is mentioned in the Antonine Itinerary of the 2nd century as being 17 miles from Manchester.

Although Roman Wigan is buried deep beneath the town, numerous finds have been found that suggest Coccium was larger, and more important to the Romans than previously thought. Finds include:

Why did the Romans choose Wigan as a settlement? It is believed they chose the site because it was on a hilltop, making it easier to defend. The River Douglas also ran to two sides of the hill which would have been much steeper than it is today. It was also a point midway between the crossings of the Mersey at Wilderspool and the Ribble at Walton-le-Dale.

Some of the Roman Roads linking major Roman settlements.