Thanks to Keith Roberts for providing his poem that was read on BBC Radio and published in one of Geoffrey Shryhane's books.

Keith Roberts also sent the photo of the Old Arcade. Thanks to Geoffrey Shryhane for allowing me to use his work.

Paraffin lamps and picture postcards
Sausage and chips and bucket and spade
The local rag, shopping bags
You could buy them all in the Old Arcade
Do you remember the Old Arcade?
It was only yesterday . . .

Bustle and jostle, cloth caps and clogs
People of every profession and trade
Some spent pennies and some spent pounds
But all of them came to the Old Arcade
Do you remember the Old Arcade?
It was only yesterday.

A pint of stout or a present for Mum
Handsome bachelor, little old maid
The white tiled walls held a million tales
Of the goings on in the Old Arcade.

Now it's gone. They pulled it down.
Only yesterday. Pounded, scattered.
All those stories. All that chat
Of losses lost and profits made. 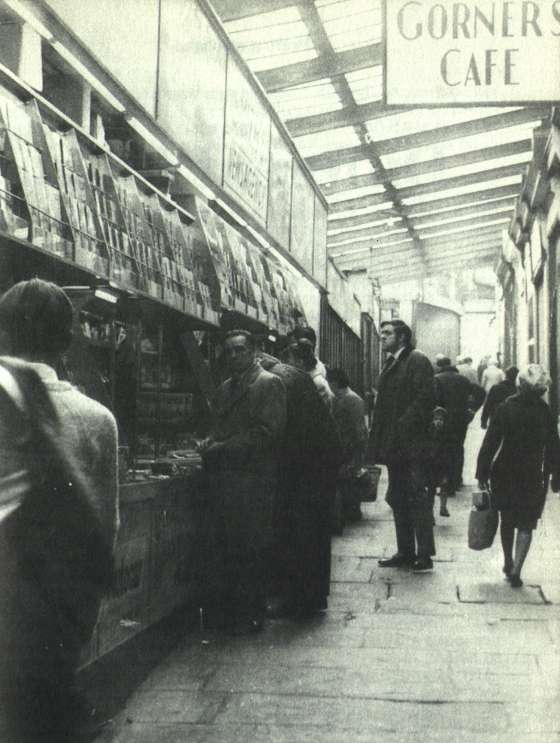 Even today, many years after it was demolished, many people fondly remember The Old Arcade which ran from Wigan Market Place to Woodcock Street. Its atmosphere was unique. At both ends, the Top and Bottom Legs of Man pubs. It cost an old penny to be weighed on the jockey scales and over all there was a mouth-watering aroma from Gorner's cafe and cigar smoking Sid Smith at his newspaper and bookstall had a smile for everyone.