Thanks to Alan Leigh for providing history about the Stanley family plus a picture of an old oil painting showing the arcade and pub. 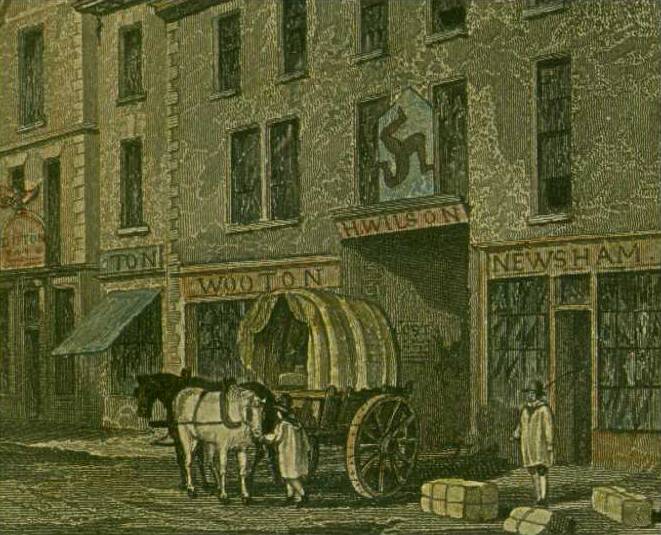 The "Legs of Man" is of course the coat of arms of a very old and famous Lancashire family, the Stanley's of Lathom. Once the ancient kings of the Isle of Man, the family have been important factors in both of our civil wars and the Battle of Flodden.

It was on an August afternoon 1485, when Thomas Stanley picked up the crown from a hawthorn bush, and placed it on the head of Henry Tudor after the battle of Bosworth. Signifying the end of the War of the Roses, and the beginning of the Tudor dynasty.

In September 1513, the English on the right had been beaten; and the centre was in doubt, when, Sir Edward Stanley's Lancashire and Cheshire men threw off their boots so to be able to get a better grip of the slippery hillside. Reaching a point above the Scots, they let fly such a volley of arrows that the Scottish lines were piled up with the dead - at the Battle of Flodden. Sir Edward, first Lord Monteagle, was later immortalised by Sir Walter Scott:

The war, that for a space did fail,
Now trebly thundering swelled the gale,
And Stanley! Was the cry.
"Charge, Chester, charge! On, Stanley on!"
Were the last words of Marmion.
(His badge of an eagle's claw is with the arms of Isle of Man in the chancel of Hornby church)

In 1607 the eldest son of the 6th Earl became the biggest landowner in Lancashire and prince of Isle of Man. At the age of 19 he married Charlotte a French countess and moved to Lathom House.

As soon as he saw that civil war was inevitable, he supported the Royalist cause. He later joined the second king and it was he who guided Charles to Boscobel. Whilst away on Royal Command to protect his Isle of Man, 'Lathom House' one of the last fortified Royalist homes became under siege. Charlotte was told, "Give up Lathom?" Not she! And for three months, this courageous lady held out. Finally a heavy mortar was brought up which bombarded Lathom House, but the building was too strong. One day she proclaimed that the mortar should be captured, which she remarkably expedited. The lady held out for three months until her husband who took his whole family back to the Isle of Man, rescued her. The Parliamentarians razed his home to the ground.

Already a fugitive from the Wigan Lane conflict and having once escaped from Chester Castle but recaptured; it was Cromwell himself who made the military arrangements for his execution, on the scaffold, in Bolton's market square.

When ready at last, the Roundheads were alarmed at the weeping peoples attitude and therefore began to slash the throng with their swords, it was the Earl's final act of chivalry, which prevented further bloodshed. He stood and addressed the army, "Gentlemen, it troubles me more than my own death that others are hurt. I beseech you to stay your hands, I fly not. You pursue not me; and here are none to pursue you". He was then beheaded.

(The great Laxey Wheel I.o.M. is embossed with words: 'Made in Wigan')

(Above: part of an old painting lent to me by an old resident of Eccleshall, Staffs. Whose great grandfather worked in the editorial office, of The Wigan Observer.)