Will it catch on?

I don't mean a poor excuse for a vestibule, but a handy snack for Leythers.

I shall start researching how to dehydrate lobbies (although they call it 'lobby'). Maybe even freeze dry the stuff.

Not forgetting a little sachet of red cabbidge 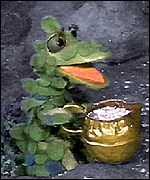 No advertising look at the rules

Can they cook in Leigh

Shut up Mache, or I'll seek a banning order.

Maybe an optional flask of hot water could be the solution.

Or one of These

Somebody did something similar in real life.

The containers were more saught after than the product. Can't remember who.

Similarly chewing gum. One mon started giving it away as a sales gift, ended up seeling the gum instead and building an empiere.

Too late its already been done

That could work, Kryten.

Seeling the gum AND cabbidge

Thinking I may have done it before.

I was nearly right:

1891 William Wrigley Jr founded Wrigley Chewing Gum. Existing companies offered similar products that were much more popular, than gums from Wrigley’s. One day in 1892, Mr. Wrigley got the idea of offering two packages of chewing gum with each can of baking powder. This offer was a huge success! His first two brands were Lotta and Vassar. Juicy Fruit gum came next in 1893, and Wrigley's Spearmint was introduced later that same year.

Have you seen the state of this thread?

A word from my sponsors:

Beware of reds under the bed

Packaging department will be looking at something on this style, in plastic, with a foil lid.

Well the army have done it with dehydrated Lancashire Hot Pot.
But the troops are fed up with it.

We want Balti not Hot Pot

Mine will have the red cabbidge sachet. Which is different than the army's.

I don't want dragging off by the red caps.

Remember on darts match nights when the host pub would put on a bar spread of strong Lancashire cheese butties with sliced onions in bowls of vinegar, and sometimes to be different some pubs would put out a bowl of pickled red cabbage too, cheese and pickle butties always tasted better with a glass or two of ale.

Blotting paper butties and see through ham was the order of the day at one time.

A bit of a draft & the Ham blew away,

I may film an exotic advert in Nell Pan Lane.

What happened to that last film you were going to make? Did none of them want to sit on your casting couch?

I've not made Lobby for ages. It's nice with Pickled Beetroot too and a thick crust of freshly made bread and best butter.

I may have killed the Recipe thread and you have taken to putting the recipe on here.
Post a lobbies recipe on Recipe thread please, VG/EQ. Mine never manage to be as goood as Grandma used to make.

And there it was

As long as you don't report me to John Stalker. He may set the drummer on me.

Drummer will press the 'Zap' button.

Threats now is it

I don't know what happened there. I linked to one of thiise yellow warning triangles.

dostaf, even Google has never heard of lobbies or lobbys, cos this is what they think of them 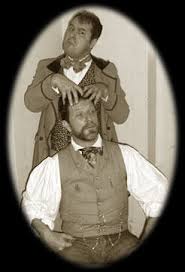 I had to cover my back on here and refer to them/it as 'Lobby'.

this appeases the Leythers and saves them writing nasty letters about me to whoever will read them about 'discriomination'.

They're a funny lot in Leigh.

i give up, can't do with all this crytic
ttfn

Apologies, I thought you were local, Piccy.

i am local - but still cryptic to me

i like to say it as it is, and not go cryptic with stuff,
just noticed on your link, dostaf, you was dustaf then, is that a cryptic thing again

I changed it from Dostaf to Dustaf for a while. Nothing underhand, same avatar, no attemt at deception.

Lobby is what people from Leigh call lobbies.

It is the subject of many light-hearted arguments with Peawapp. Peawapp being a poster from Leigh.

Doctor, DoctorEvery time I drink a cup of coffee I get this stabbing pain in my eye!I suggest you take the spoon out!

A bit of useless information...

We used to have a pan specially for Lobby, and we weren't even from Leigh.

You must be REALLY old to know that joke, Dostaf!

I lifted it off a website. But you mentioned it previously.

I did, I remember jokes I am told. I didn't write them.