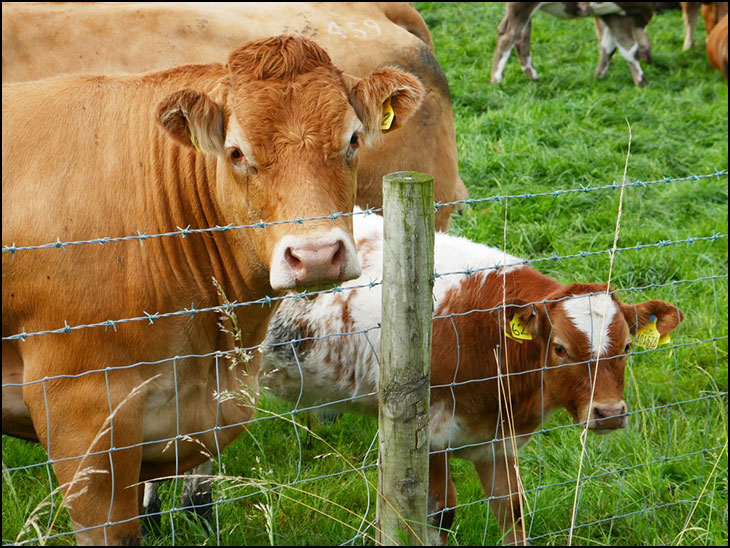 Cows- never would have guessed.

So there I was standing in the field just minding my own business and chewing on a nice bit of grass when along comes a fella in a white jacket and gives me a clip round the ear! Now I've got this big yellow number hanging out mi lughole, I don't know, what's it all about eh ?

They're beautiful... and it's a damn shame what the future has in store for them. Pauvre bêtes. I'm not vegetarian by any means, but if I had to kill and butcher my own meat, I think I probably would be. In fact, I suspect the majority of the population would be as well. I once did a spell driving around the slaughterhouses collecting barrels containing the intestines of cattle, sheep and pigs, to be processed and used as sausage skins. When I arrived on site, the beasts would be braying in the pen. 45 minutes later, their innards would be in barrels, on pallets, on the back of my wagon. It wasn't a job for the faint hearted or for anyone with a sensitive nature. That's why I didn't last there very long. I also collected the hides from slaughterhouses up and down the country and took them to Warrington and Birkenhead, among other places, to be made into leather. Some of the sights I saw were truly hideous. I still wear shoes made from leather though....but what's the alternative ? What did people wear on their feet before leather was invented ?, hollowed out hedgehogs ?, coconut shells ? I just don't know. What I do know is this, the indigenous population of North America had the right idea, if it's absolutely necessary to kill a fellow creature in order to stay alive, then at least be respectful about it and make use of every part of the animal. Consider the amount of meat that the supermarkets throw away daily. It's bordering on obscene, but under a capitalist system, it's totally necessary. Thinking about it, as a society, we're an absolute shower aren't we ?, and we are the dominant species, i.e. we're in charge................ All I can say is, roll on Armageddon.

Is the grass greener on the other side?

Plenty of ribeye steak there!

I remember when their ancestors were driven up Scholes in the early fifties....scared to death I was!

Before embarking upon flights of whimsical fancy, Ozymandias, learn how to make French adjectives agree with the nouns they qualify.

Ozy.that's exactly why I won't eat any animal product..I do eat fish.but even the sight of beef makes me feel sick..I mean how beautiful is that cow..and when they take the calves from them to produce veal,the cows actually cry..yes I wear leather shoes but Im not proud of the fact..only my opinion,but I'd sooner eat grass than a beautiful animal.

ozy, Try living under a communist regime, you won't eat much meat,

Ozymandias, you are on the right path, do not deviate from it, only you will know what I mean.

VB,I bet the animals were scared to death even more.

Probably Maureen as they seem to have a premonition when they are going to be slaughtered!

Just making sure you were paying attention Michael.

Growing up,the railway was right at the back of our house,I'd hear the cows that were on their way to slaughter in the night..they used to moan terrible ..they were crying..it was heartbreaking.

On a lighter note the cows remind of Jersey Ice Cream it's the best in the world in my opinion. I don't eat ice cream as a rule but when in Jersey ........mmmmm can't resist!

Vb; I felt just the same about ice cream in Devon and Cornwall, but that was so long ago that I've quite forgotten! Any old ice cream does it for me now!