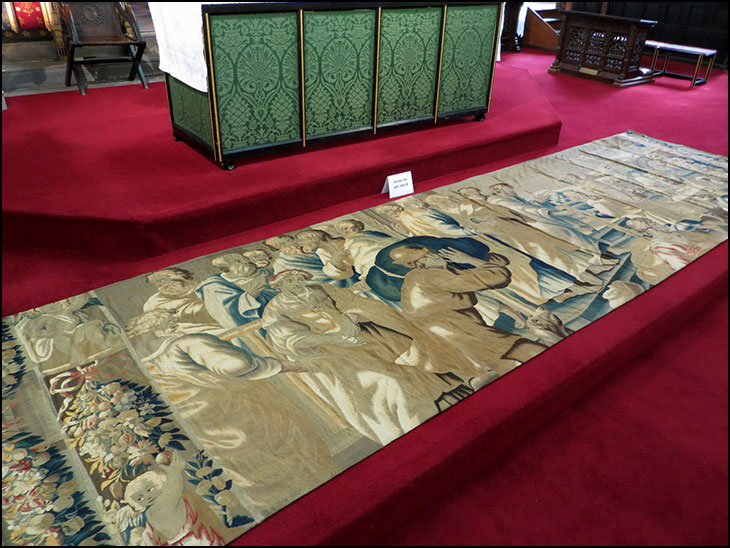 I'll hold my hands up here, although it appears to be a nice piece of kit, I know nothing whatsoever about the Mortlake tapestry. In fact, this is the first time I've ever heard of it, although I have heard of, and in fact actually seen, plus, I got in for nowt, the Bayeux tapestry, in, of all places, Bayeux, and I believe, ( here we go again ), I believe that one depicts the Norman invasion of England in 1066, the momentous occasion when we all began to learn to speak the French language.. There's also a small panel that shows Halley's Comet, which was visible in the same year evidently....I'm not sure what this particular tapestry depicts, but it seems like a bunch of religious types have just finished their nice dinner, leaving some poor pleb to cart the scraps off to the recycling bin. I could be completely wrong of course, no doubt someone will put me right. But my principal query is regarding the word Mortlake.,I'll put it this way, If the Bayeux tapestry was woven, or whatever, in Bayeux, then surely it would be logical to assume that the Mortlake tapestry was produced in Mortlake. Now the only Mortlake that I'm aware of lies on the banks of the river Thames, not far from Kew, or is there another one somewhere ? I know there are a lot of educated people on this site, but the question is, who'll be the first to step forward with the answer ?

Thanks so much for this! I'd heard of this tapestry back when it was last exhibited, and as this comes from a period that I'm most interested in,I can console myself with this peek at what seems to be an excellent specimen! Once again,thanks!

I would like to know as well - thanks for putting the question forward. All I can see is that it has 'lost' much of its vibrancy in its colour due to its age which is only to be expected. I would be interested to know what Antiques Roadshow valued it at!!!

Ozimandias, just googled Mortlake Tapestry and the factory was indeed at Mortlake on the banks of the Thames. Flemish weavers were employed to weave hundreds of tapestries and the one in Wigan Parish Church is just one that was produced in the 17th century. Immigration goes back a long time. I wonder if English weavers protested in times gone by?

The Mortlake Tapestry Works was indeed near London close to what had been the house of the famous Dr Dee. The specimen at Wigan Parish Church seems to have retained a lot of the original colouring.

You can read more about it on the parish church website under 'needlework'.It was made at the Mortlake tapestry works.

Now why on earth didn't I think of Googling Mortlake tapestry ?......Doh !!!.....Thanks for the replies, and many thanks to David for bringing the item to my attention in the first place.

Why is this not on permanent display?

Ozy - as any file kno - the Bayeux Tapestry was Made in England, by Anglo-Saxons.
Wigan Twin Town of Angers has some magnificent tapestries on display in a specially-built hall. They were discovered being used as horse blankets, having been cut into sections for the purposes. Somehow they always seemed to have been used one way up - so one side has been dulled by the weather, but the other is still radiant. To preserve them they are still displayed with the weather-beaten side visible - and the 'fresh' side shown in all its glory alongside on a life-size photograph. Well worth a visit if you're ever in Angers.

See ?, that's two things I've learned today. The origins of both the Mortlake and the Bayeux tapestries, three if you count the info regarding the tapestries in Angers. I daresay there may be one or two other people on here who have learned something as well, and that has to be what it's all about surely ?, learning a little something new every day.

Ron, the age and condition of the tapestry prevent it from being on permanent display: every exposure to light causes damage to it.