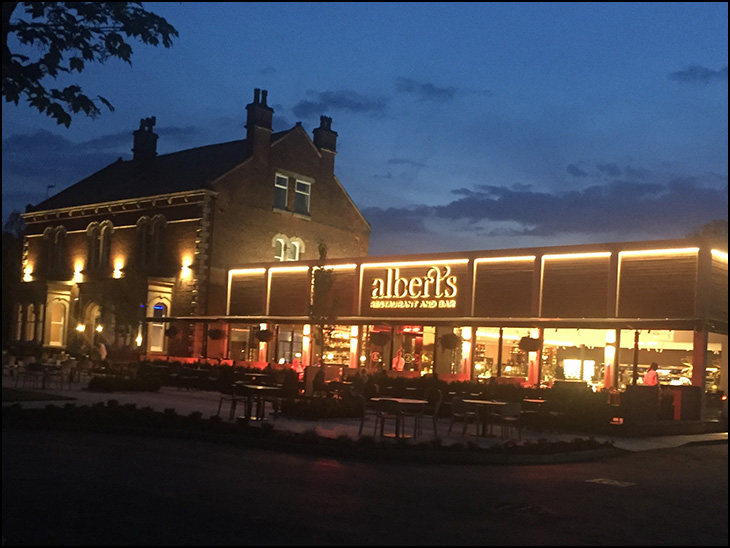 A lesson in how to spoil a beautiful Victorian house.

if the sign was Al's Diner you would swear you were in America...

Crikey that's changed since I stayed there

Anything goes nowadays if there's money in it, and that's something that's about to get worse.

You are spot on Pat McC.

Pat Mc C, at last somebody agrees with me. I said a few weeks ago that you can’t put a modern extension onto a grand Victorian house.

dont have fish and chips

Lots of negativity here. Wow! Haven’t been yet but I know several that have and all have been complimentary about the food, service, design/decor and in particular how the new build has been married up to “the old victorian house”. I wonder how many of the above “posters” have been to take a look.

I think Albert will be over the moon that the types of Wiganers on here commenting about his new restaurant wont be going, it will leave plenty of space for the posher people who will, travel from all over Lancashire.

Is the owls still open?
They used to do a great steak poivre, was alway my favorite together with a shrimp cocktail starter and a large slice of lemon meringue pie to finish not forgetting a bottle of peirmontello to wash it down!
The last time I was in there was 2000.

It's certainly smart, Dave, but perhaps Albert's seven front panels should have echoed the domed windows of the old building - Their flat roof seems to tally with the old building's horizontals. Just a thought.

£5 a pint, that pays for the electricity bill. otje2

I’m sure if a bidder had come forward at the planning stage , with a genuine plan to extend it Victorian Wise , the Council would have taken it into consideration. Blaming this extension, is like blaming why pubs are closing . If they were full they wouldn’t close,
no matter how old they are . Money and Business talks ! No matter how historically
valued a building is in a place like Wigan , its
history will always be overridden by economics , growth , value , purpose , progress and whatever , deemed by those in place in Council at that time . They decide !
We are just puppets most of the time , who see it , don’t like it enormously, but time after time , just accept it and go with the flow . And then , when the passing wind has gone , just moan , complain and blame others . I am the problem , we are the problem, because we get angry , get furious , but then go back into the flow of Ah Well ... and acceptance . Every Government knows this , Every Council as well. That people should be allowed to shout thunder as loud as they like , as long as they know , they must after return to same pipe called the Norm . The Norm , decided by..??

Sod this over-priced crap, with its tasteless restructuring of a highly dignified and attractive Victorian mansion. £5 a pint? Shove it. Wetherspoons here we come!

julie what a load of tosh !

It costs a fiver for a glass of red wine in most pubs when having a meal... It's robbery with a capital R.