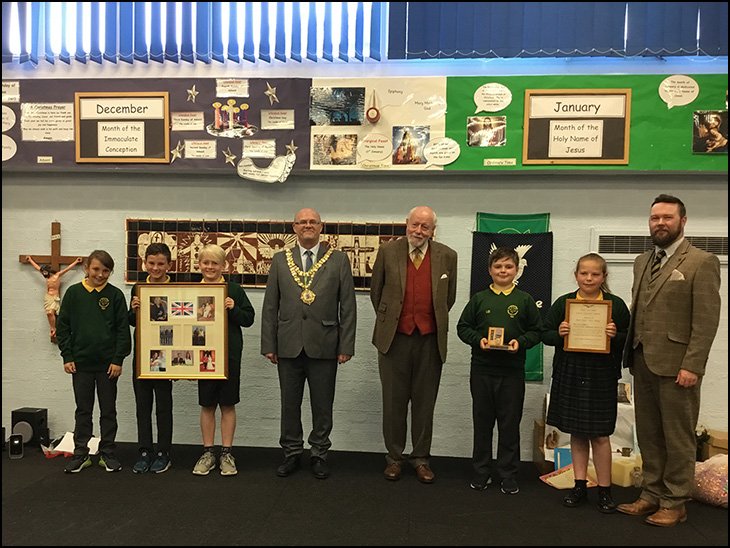 Nice to see both young and old involved.

The medal was awarded to a former pupil. Below is his story.

On the morning of 6th of June 1920 there was great excitement in Silver Street Wigan ,Fred and Annie Jervis were delivered of a son,who was to be named after his Dad,and his mother's brother Joseph Molloy who was killed in WW1, little could they have imagined on that summer morning that a journey had begun that would eventually lead Annie to Buckingham Palace,and a meeting with H.M. King George VI, in heartbreaking circumstances.

Young Frederick Joseph Patrick Jervis had an idyllic childhood ,brought up with loving parents and his Aunty Lizzie who lived with them, 14 years later the family was made complete when a sister ,Elizabeth arrived , named after their beloved Aunty Lizzie. Fred absolute doted on Betty as she was always known.Betty still lives in the house they moved to when Fred was 13 , and is as proud of his memory as he was of his baby sister. In one of his letters home he worries about her safety on a bicycle that he had bought for her, what a tribute to his humanity that whilst facing the enemy in the most horrendous conditions he worries about the people at home.

Fred Jervis was born 2 years after The Great War had ended, know as" the war to end all wars ", 'O' that ,that were true, this typewriter would be silent,and years of heartbreak would have been avoided for The Jervis Family, and who knows how many Jervis children would have graced our town .Betty still feels a great sense of loss 73 years after that tragic day and regularly visits Fred's grave in Wigan Cemetery, this too could have been very different, if fate had played a different hand. His family in a strange way were grateful that at least they were able to visit his resting place, earlier I mentioned that Annie Jervis lost her brother in WW1 ,and he is buried in a" foreign field", this compounds the loss, something that his sisters fretted about for the rest of their lives

After St. Patrick's School, Fred secured a job at Santus Toffee Works (Uncles Joe's),later he joined Pendlebury's Department Store. Then,The Royal Air Force ,and ultimately to Squadron 156, The Pathfinders, the bravest of the brave all volunteers.who put their lives on the line night after night to lead bombers over enemy well defended territory, the most dangerous of tasks, so much so that the crews were limited as to how many sorties the could take part in .at the inception of this new arm of 'The Boys in Blue' in1942 the limit was 60, such was the loss of life that this was reduced to 45 to encourage volunteers. Fred took part in 47 ,flying over 300 hours .see his citation below. He was posted to Upwood Air Base Lincoln, to train new volunteers as Pathfinders,and it was there that he lost his life in a training accident, all ten men aboard died 9 immediately and the other one the following day from horrendous burns.

L/G 18/1/1944. Sorties 47, Flying hours 302. Flight Engineer .Air2/9153.
As a Flight Engineer, Flight Sergeant Jervis had carried out a continuous tour of 47 operations against the majority of heavily defended targets in Germany and enemy occupied territory . His unfailing reliability and coolness have been of the highest order. Throughout he has shown commendable knowledge and skill ,always setting a very high example to the rest of the Flight Engineer of the squadron. His outstanding devotion to duty as a member of an exceptional Pathfinder Force crew makes him a very worthy recipient of the award of the Distinguished Flying Medal. 21st November 1943.

The Pathfinder Force was founded in August 1942 It began operations within a few hours of its formation and continued its work leading the main force against the enemy until the bombers offensive ceased shortly before VE Day. The gallantry of The PPF is legendary and its contribution to the war effort immense .No 8 Pathfinder Group was the only officially recognised elite unit of Royal Air Force Bomber Command during World War II. They lost at least 3729 on operations .


Fred's sister Betty has helped me so much in preparing this article, giving me unfettered access to all her photographs and documents, now eighty two years old and as sharp as ever she was, she's obliviously still saddened by the loss of her big brother at such a young age , she describes it "as a hurt the never fully heals", but there is no bitterness or self pity. There is however a great sense of pride, and mementos are on display in her home including his medals .One of her special treasures is the letter of invitation to The Palace another is a copy of the book "Never a Dull, War Memoirs of a Pilot" by Bill Manifold ( Squadron Leader W.G.Manifold,D.F.C. and Bar) Fred is mentioned several times, his image is also on the front cover, taken from an original photograph. Betty was also delighted to receive news that a tree dedicated to her brothers memory was planted on 21st March 1999 at The National Arboretum ( and instead of the briar shall come up the myrtle tree )

Fred Jervis married his sweetheart ,Rosaline, on 2/81943. After a brief honeymoon , back to duty. Shortly before the tragic day Fred had been informed that he was to receive the DFM, he also received news from Wigan that he was to become a father. I've had sight of his last letter,in it he says he's looking forward to marking the good news with a celebratory drink with his family, and looking forward to meeting The King, In in a cruel twist ,it was his Wife and Mother who would take his place at Buckingham Palace. Rosaline lost the baby a short time after receiving the devastating news ,that after facing the enemy night after night he lost his life a training accident . His family have always believed that the shock of the loss of Fred ,was at the very least a contributory factor in the loss of the baby

The part that sadden me whilst doing research on Fred Jervis ,is how this class ridden society treated different social groups, for instance if Fred had been an officer he would have been awarded a Distinguished Flying Cross as opposed to Medal the travel warrant sent for the visit to London for his wife and mother, would have been 1st class not 3rd . Valour knows no difference between rich and poor, between officer and rank and file, bravery is bravery whether you use napkins or not, forgive the ludicrous analogy, but it does seem to sum up the ridiculousness of treating heroes differently based on which side of the tracks they were born ! After a review in 1993 this anomaly was rectified and The D.F.M. became available to all ranks , and the D.F.M. discounted not a moment to soon !


I'm sure that Annie and Fred Jervis Sr. would be pleased that his bravery and dedication have not been forgotten and that his contribution to the defeat of Nazi ideology which would have undoubtedly spread its tentacles throughout the world without the likes of their brave son and thousands like him. Thank God for their courage and steadfastness.

Thomas..... I recently discovered you are father in law to one of my cruise shipmates sons. Sure you will know the one I mean.

I should have mentioned it in my earlier post,
If anyone would like to see Fred's wedding photograph and the letter from Buckingham Palace , go onto Album - people scroll down to Jervis Family.

We have a swallow nesting in our shed and the young have just hatched. The sheep are ready for shearing and as this is done in the multipurpose shed, we have to wait for the chicks to fledge. My husband says that that’s the least we can do seeing as the swallows have flown here all the way from South Africa! Meanwhile our pet sheep will be wearing their woolly coats for another couple of weeks or so!

I wonder how many actually went on the DDay landings from St Pats - there would have been many prayers and Masses at that time for them all. It's good to see the children learning about those days - we certainly didn't really know much. If anything we were kept in the dark!!

Tom I have looked under 'People' for Jervis but can't find the pictures you mention.