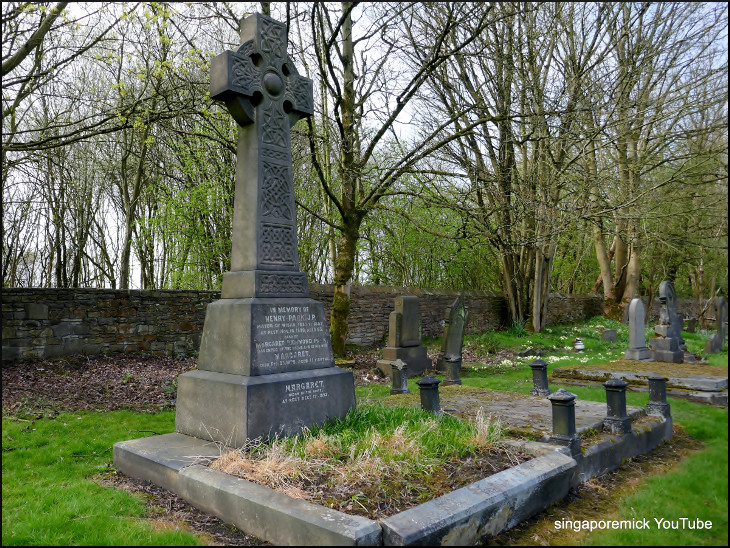 Theres a street named after Henry in Ince, its called Henry Park Street

I was born and brought up in Henry Park street, but never knew it was named after a Mayor of Wigan

Henry served as Mayor of Wigan for five consecutive years, this is an almost unique, in order to find someone else who may have equalled this, one needs to look back 500 years to find Adam de Byrkeued who is recorded to have held the position in the years 1387 to 1391.

Henry was born into a family who had been involved in the iron trade in Wigan for almost a century the business had been founded by his grandfather William Park.

His grandparents William Park and Agnes Otley were originally from Colton a small hamlet located south of Lake Coniston in the Lake District. They had married there in 1785 and had two sons, Jonathan and Ambrose, prior to relocating to Wigan apparently sometime between 31st January and 9th September 1792 (their third son William was born 13th January, and appears to have had two baptisms, the first on 30th January at Holy Trinity, Colton, Lancs, and the second time on 9th September, at All Saints, Wigan.

Henry’s father was Jonathan, the elder of the three sons born to William and Agnes

Jonathan Park married Henry’s mother Alice Swift on 4th June 1809 at All Saints Hindley. Henry’s mother Alice gave birth to ten other children prior to him being born on 17th February 1827 (several of these siblings died in infancy however). He was baptised at St George’s, Wigan on 4th March 1827. The family lived in Scholes, this is confirmed by the census of 1841 which identifies Jonathan, Alice and four children Elizabeth, Mary, Henry and Hannah.

Jonathan, Henry’s father died in October 1849 and Alice his mother just five months later in March of 1850. The 1851 census shows Henry and two of his sister’s living with their 90 year old maternal grandfather Robert Swift at Upper Chapel Yard, Scholes. Henry’s occupation being given as a Traveller in the Iron Trade

By this time Henry’s Uncle William (his father’s surviving younger brother) had assumed control of the family iron trade business and Henry having completed his education had joined him as an apprentice, their offices and extensive warehouse premises were located in the Wiend, whilst the forge and works were situated on School Common.

On 1st March, 1853 at the church of St. John, Preston, Henry aged 25 was married to Alice Monk, (who whilst being identified as the daughter of veterinary surgeon William Monk, appears to have lived for many years in the household of her maternal uncle William Chew, a licensed victualler / inn keeper).

Henry and Alice his wife were living at No. 2 Water Heyes, Wigan at the time of the 1861 census, a Catherine Monk (presumably, sister-in-law) was a boarder. Henry’s trade was recorded as Iron Merchant. There are reported references indicating that at some time during this period Henry took on the role of managing partner for the family enterprise.

Henry stood as a candidate in the municipal elections held 1st November, 1870 and was successful in his bid as Conservative representative for All Saints Ward. He commenced his involvement serving on the Watch Committee and also the Property and Charity Committee

This recent development in his personal life is confirmed on the 1871 census return in that under the heading Rank, Profession, or Occupation, the entry reads “Town Councillor & Iron Merchant”

Sadly however (although the precise details are as yet unconfirmed) his wife Alice must have died during the 1861 to 1871 census period, for he is now registered as a Widower, and living at 1 Lower Whitley, the accommodation shared with two servants, but no family members.

Henry remarried on 1st August 1872; his second wife was Margaret Richmond the daughter of a deceased Merchant Tailor from Canning Street, Liverpool. They were married in Liverpool at St Bride’s church. They had two children, the first being Margaret Richmond Park who was born 30th March 1874, she was baptised 27th May 1874 at St Catharine’s church, Wigan

William Park the uncle, mentor, and partner of Henry died 15th December 1874, Henry thus becoming sole proprietor of the business. The loss of his uncle was not the only grief Henry and his wife would suffer as their recently born baby daughter Margaret died in the early months of 1875.

Henry and Margaret’s second child, a son Sidney Richmond Park was born 24th January 1876, he was baptised 21st April 1876 once again at St Catharine’s, this being the church that Henry attended serving as sidesman and also churchwarden for many years, also with which he would remain associated for the rest of his life.

In 1878 Henry was made a Justice of the Peace for the Borough this was also the year that the family left their home in Wigan and relocated to live at 22 Scarisbrick Street, Southport.

The year of 1882 proves to be particularly significant, for in October Henry was elected to fill a vacancy which had occurred on the aldermanic bench and soon after this he was elected to serve as Mayor. This was an honour for him which would be repeated consecutively on a further four occasions, and would result in Henry being the incumbent Mayor during celebration of Queen Victoria’s Golden Jubilee on 20th June, 1887.

A notable involvement during this extended period of occupying the Mayoral role being that he is credited with being instrumental in the process leading to the erection of Wigan’s public baths in Millgate.

Both Henry and his wife the Mayoress, took a full and active part in the affairs of the borough, they are recorded as having hosted many events and supported many causes.

The following is a précis of an article carried by the Wigan Observer of 17th January 1885, under the heading “The Mayors Treat To Aged People”: which describes one of the events.

The report praises how it is that at this season of the year that “the poorer classes” receive increased attention at the hands of their more wealthy neighbours it then continues by describing the event at which the Mayor of Wigan had entertained 360 aged people to a “very substantial tea” in the Public Hall.

Prior to the event, tickets had been passed to local ministers of each denomination for them to distribute to the aged whom they considered to be deserving of them.

The decorations from the seasonal Conservative Ball had not been removed. The old people seemed to enjoy the feast immensely. After tea, entertainment was provided by The Wigan Quadrille Band, during which packets of tea, cakes and oranges were distributed. Prior to the commencement of the entertainment the Mayor spoke saying that he was pleased to have the opportunity of meeting those present and that there was nothing which had given Mrs Park and himself greater pleasure than inviting them to partake of their hospitality (and old lady in the audience responded “God bless you”) he went on to say that he was pleased to think that he had done something towards relieving the necessities of some of his fellow creatures and that God had given him the strength to attend the occasion.

The latter comment made by Henry could possibly be a reference to health issues he may have been experiencing, for there are newspaper reports in the early months of 1886 which refer to his recovery from a long period of illness.

One report gives details of a surgeon from Liverpool being called; he declared that Mr Park was in a highly critical condition with the danger of a stoppage of the wind-pipe. It was decided to use leeches and a dozen of these were applied during the evening, this procedure being repeated several times over the days which followed.

Pre arranged events continued to take place during Henry’s extended period of incapacity with his wife the Mayoress and son Sidney acting as hosts in his absence.

Henry made a recovery and on 7th April 1886 made a return to resume his civic duties with his attendance at the monthly meeting of the Town Council. In November of 1886 Henry was re-elected once again

In June of 1887, The Mayor & Mayoress held a garden party in Mesnes Park, to mark Queen Victoria’s Golden Jubilee. The leading inhabitants of the town had been invited and a refreshment buffet provided. On conclusion of the event, the park gates were thrown open to the public and a ceremony took place which involved four fine sycamore saplings being planted to honour the occasion. The planters of the trees being The Mayor, The Mayoress, Master Sidney Park and Mr. Francis S. Powell.

Henry vacated office in November 1887, shortly after which he once again suffered serious health problems and whilst there was a slow improvement he never regained full health. Towards the end of August /early September 1890 he fell ill once again this time with heart and kidney problems, (at the time referred to as Bright’s disease). He failed to recover and died 16th November 1890

His funeral took place Thursday 20th November, 1890 his remains were transported from his home in Southport to Wigan for interment at Wigan Cemetery.

I thought at first that Mick might have mis-transcribed the dates he was Mayor (i.e. that it should have read 1882 and 1887 - which would not be unusual), but he's correct - very unusually, he served for five consecutive years. Read more from the Wigan Archives here: https://archives.wigan.gov.uk/archive/civic-histories/wigan-civic/park-henry

The Vctorians didn't spare any expense for grave stones in those days with the crosses and Angels. They actually valued the services of the Mayors and Councillors, can't imagine that happening much these days. A lot of street names refer to long forgotten, illustrious citizens - Darlington St for one.

In the end, rich or poor, we all end up with the same size of medal.