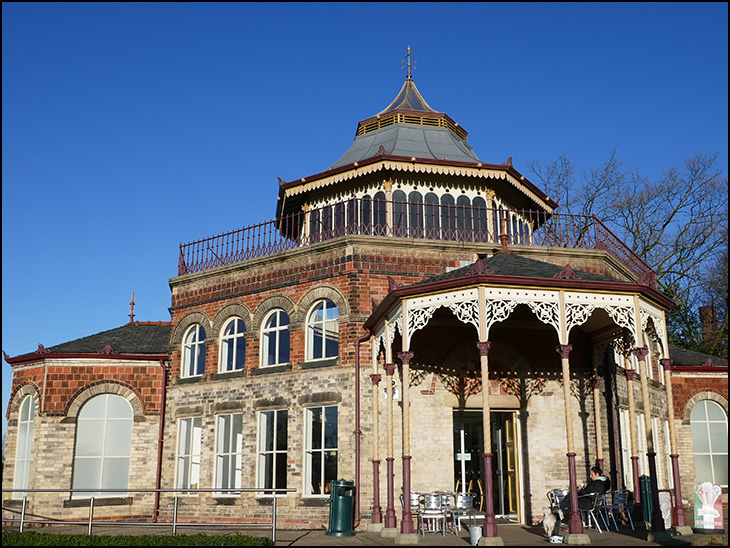 Thanks Mick . I can't remember if I've posted this article ,please forgive me if I have .


Early nineteen fifties, Sunday afternoons without fail, I, along with a collection of older cousins, walk to Mesnes Park. Church out of the way, and armed with coppers earned throughout the preceding week, going errands, for neighbours, or on a particular good week, shillings from the rebate, after the gas meter had been emptied. This time of wealth alas, only occurred infrequently. I know more than one school pal, who decided that the collection money meant for the upkeep of the church, would be better spent in The Park Cafe, "anyway it's only tuppence and won't be missed", said to justify their misdeed. I must confess to being tempted to follow their lead, but after much soul searching, concluded that eternal damnation, and the fire that never goes out wasn't worth risking for a few pence. Catholic guilt I suppose!

On the way to the park we would often call at The Market Square to admire the cars that had been parked over night, each child would decide which car we would like to have when grown up, my choice was always the Triumph Mayflower, an ambition that hasn't totally disappeared.
On reaching the park gates, the race was on, to reach the statue of Sir Francis Sharp Powell. Each believing the story, that if you rubbed his foot and ran round the bronze figure three times, you would find a sixpence. I can't remember feeling disappointed when week after week the promised reward failed to materialise. However, I can still remember the excitement when the predicted dividend, almost transpired. That particular Sunday, I won the race, and having completed the ritual, made my way towards the cafe. As I made my way along the path (no waking on the grass in those days). In the distance, glinting in the afternoon sun, I see what I convinced myself was the long looked for tanner, alas to be crestfallen, on discovering the windfall was only a threepenny bit. After initial disappointment, I am pleased with my find. Hence from that day, I have believed that this local piece of folklore is at least half right!

Next stop the cafe,to spend our treasure, winter months hot Vimto , on warmer days a glass of lemonade , and if funds allowed a Cassinelli ice cream,with raspberry. The establishment was always packed to overflowing ,my sister,seven years older than yours truly,was usually there,and not at all happy to see my smiling countenance. Her group of friends used the cafe to show of their Sunday best and look for eligible young men, more than one marriage had its beginnings in the Park Cafe. An uninvited little brother may well have cramped her style. I more often than not managed to blackmail her in to giving me a copper or two to make myself scarce. Then loot in my pocket of to the playground .
We would play all sorts of games, the girls Seashells , two ball, hopscotch and skipping sung to rhymes such as "Tinker, Tailor ,Soldier, Sailor,Rich-man,Poor-man ,Beggar-man,Thief" .
The boys would have no truck with such girly games, perish the thought ! you'd have been ostracised if you so much as touched a skipping rope, worse still a ball if it wasn't a football or a rugby-ball . Although some games were played by both sexes Hide and Seek
and my particular favourite Skilly, a game I think peculiar to Wigan,I won't go into the rules, but I'm sure many readers of The Wigan Observer will also remember it with fondness. Another popular game, the older boys would play Tarzan on the monkey bars, the younger boys Cowboys and Indians and even more controversial Japs and English,or Jerrys and Briits ,remember this time was only a few years after World War 2,and people were far less hung up on political correctness. It was a time when people would examine goods to make sure that they had no input from Germany or Japan,thank goodness times have moved on and scars have healed, today terms such as these would be frowned upon ,but not so in those days, so I felt I ought to mention them for accuracy ,certainly not to cause offence.

After the playground, a brief visit to the bowling green,the stay there was short because like my sister and her compatriots, the men,(always men bowlers in those days) were not pleased with our presence and would threaten us with 'The Parkie' ,now there was a man not to tangle with. The threat ringing in our ears and a similar welcome on Tennis Courts, off then to see the ducks,and then home, passing Sir Francis without so much as a glance; strange on entering the park everyone wanted to take part in polishing his shoe, on the way home he was universally ignored,so much so he mightn't never of lived ! Home then to a good old fashioned tea. Mothers would have busy in our absence, baking, the tables would grown under the weight of meat and potato pies ,meat pies,egg custard tarts and of course home baked bread . Sitting in the middle of the feast ,a trifle, which couldn't be disturbed until everyone had their fill of the savouries. When tea was over the leftovers were carefully wrapped in greaseproof paper and placed in the meat safe ( very few had refrigerators in those days) waste wasn't an option , my Mother was a particularly good manager , Aunties would joke " Janey can make a meal out of a dish cloth".Waste was a luxury that couldn't be afforded ! The residue from Sunday would make a lovely Monday tea or "jack-bit" for Dads and Uncles to take to the pit, today it would be called 'a packed lunch' ,although truth to tell it never tasted as good on the second day ,I reasoned because the baking aroma had dissipated , that on the previous day had the gastric juices flowing on entering your home, or even passing a neighbours house, everybody baked and the smell emitted from every door. Nothing could be touched before hands and face had been washed,and the obligatory inspection of said hands had taken place. Happy days!

Ah! What memories of the park we all have.
Even in the teenage years - prancing about in best clothes! I recall having photos taken on a number of occasions - showing them off!

Wonderful memories, Tom, especially your Mam's baking! Sunday afternoons in my childhood meant being picked up from Sunday School and being taken, on alternate Sundays, to Haigh Hall on the tractor or to Wigan Park. The café was a lovely, cool haven and you could sit upstairs back then. I always had a glass of fizzy Vimto with a blob of ice-cream in it. Happy, happy days!

Us Shevy Torys couldnt afford to be sitting upstairs drinking fizzy Vimto with a blob of ice cream in it, oh no we was on corporation pop.
First fizzy drink with ice cream in it I first tasted was in Jacks Steakhouse in Sembawang, Singapore.

Us Incers couldn't afford to go to Singapore....we had to make do with Wigan Park café. xx

Maureen: many a girl sporting American Tan nylons,white stilettos, white handbag,white gloves, sticky out Summer frock and even a hat after the Whit Walks! No wonder I suffer with 'mi' feet! afraid high heels are a thing of the past nowadays....

Crikey! American Tan. I bought the knee length variety on several occasions in St Helens for my mother - she wouldn't have any other shade.

Irene I couldnt afford it, it was the company who I was working for that paid for my ticket.

For me this will always be Cassinelli’s , not the Park Cafe . Just as it is Wigan Park as opposed to Mesnes Park .
Each to their own I suppose .
My mother , god bless her , miss her every day , worked here ,Woolworths , Eckersleys and Tupperware in Beech Hill . They did a shift in them days .
I hope Wigan Council never has plans to change this . Sadly , though , I feel progress will no doubt end up being the winner , especially in towns like Wigan .

You are a precious lady.

I think all we ladies got our American tan tights from Margaret's stall down Market Arcade.

What a lovely compliment, Fred! I really don't know what I have done to deserve that but Thankyou so much. xx

Thanks Irene , Yes, I have pictures, including the old statue, taken with my mother as a child, so know what it looked like from about sixty years ago.

Irene, it's because you always have something lovely to say xx