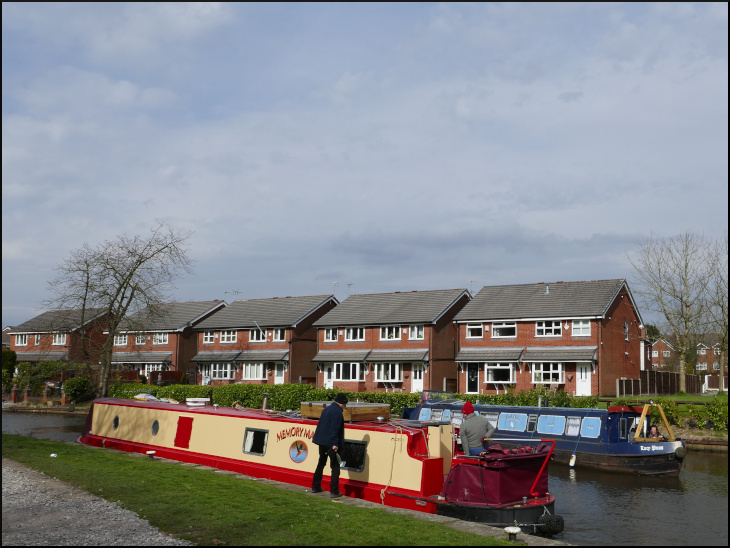 On the Leeds Liverpool Canal at Martland Mill, Wigan.

If you start a walk from here and head towards Liverpool you will find a nice clean canal bank as you pass through Crooke, Gathurst, Appley Bridge and Parbold.
Now if you head the other way towards Leeds you will find a nice concrete canal bank tow path, but if you on a push bike you will have to look out for broken glass and dog muck, another thing you will see is stuff that local fishermen have left, like empty beer cans, cig packets,bread packets and sometimes even tin foil barbecues.

Dog owners often get a bad press, the responsible ones quite frequently being tarred with the same brush as the irresponsible ones. ( I'm not a dog owner as it happens, although I'll admit to having previously owned dogs ).
Now unpleasant as it undoubtably is, at least dog muck is readily degradable, unlike glass or plastic for instance, which in most instances takes hundreds, or thousands of years even, if at all, to break down.
It's also rapidly becoming evident that the world is in peril of suffocating in its own garbage. So what's the answer?...I don't know to be honest, but what I do know is that relying on Joe Public to take his crap home with him isn't the answer, that much has been long proven.
And it isn't just the fishermen either, I don't see many fishermen in Wigan town centre but I frequently see mountains of trash, especially on Saturday and Sunday mornings.
Picking dog muck up in a plastic bag and lobbing it into the bushes isn't the answer either it has to be said.
I weighed in a load of scrap metal recently, and took the metal contents of my brown bin along, just to add a little weight. I'd separated the aluminium cans from the ferrous metal, in the hope of getting a few bob extra, but they weren't interested, saying that the aluminium was of a low standard and therefore unsaleable.
So what with poor grade ali that even the scrapman doesn't want, and a score or more different varieties of plastic that few people can differentiate between, myself included, that no bugger wants, including the council, then, short of ceasing to produce the stuff, what precisely IS the answer .
I'm sick to death of seeing images of sea turtles and dolphins hopelessly tangled up in abandoned nylon fishing nets, or dead beached whales with their stomachs full of indigestible human detritus. And that's just the tip of the iceberg. This crap's getting into the food chain, so sorting it out should be a priority for everyone.
Although I'm confident that the problem won't be solved in my lifetime, I wish I was half as confident that the problem will be solved at all....In fact, I'm of the opinion that as long as this planet continues to be driven by profit motives, controlled by greedy, power crazed, self serving oligarchs, and largely inhabited by mindless xxxxwits, then the problem will most likely get worse rather than improve.
And meanwhile, the 'rubber room' candidates that are currently in the process of piloting the ' SS Asylum GB ',are argy bargying about a bloody border down the middle of the Irish Sea.
You'd struggle to make it up really wouldn't you?

We are already shipping ton after ton of waste to other parts of the world , who accept it for ‘short term ‘ financial reasons,
but in reality, can’t deal with it .
I am on a iPad , my signal comes from space ? News this week shows we are designing /building space net catchers , to collect our space junk which serves this .
The word ‘biodegradable ‘ I would suggest needs at least four pints and a long distant view over the countryside.. As no doubt , at some point , it will revert back to ourselves .
Who degrades faster , we or a doggy bag ?

Couple of interesting and enlightening comments to 'chew' over.