A new owl in Standish 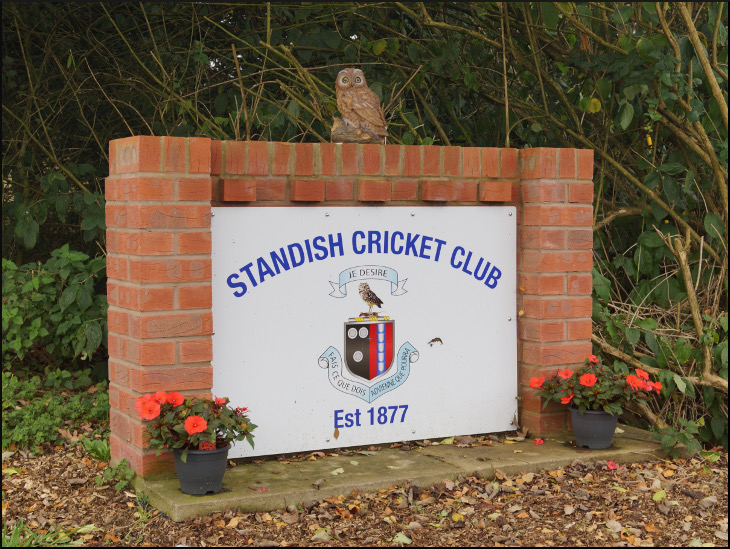 A new sign outside Standish Cricket Club. Their website says the exact date of the club’s foundation is unknown… but it celebrated its centenary in 1977.

Nice signage. I played cricket for Blackrod against Standish on quite a few times.

Looks like a bit of poor brickwork on the top left

I like that, especially the owl on the top; I love owls.

Owls are lovely birds/animals to draw and paint especially full faced ones!!

I suspect an easy bird to paint, but it's not much use painting half it's face. Nice bird.

Indeed they are Veronica, but why then are our birds of prey in such decline? Not only the Owls but the Hawks and Harriers , their breeding pairs having to be brought back to numbers by dedicated people . The balance for the rich pheasant shooters does not hold good for the birds of prey. The claim that they bring in huge funding to the countryside
and as such act as guardians of it. This I question. As far as I’m concerned the balance is wrong . In my eyes , we take more from the countryside and should give back what it gives to us. We take what is a delicate eco system , formed over millions of years , for granted. We do so at our peril.
When the bees, birds and butterflies go, then
so will we.. And , we will deserve it. Which do we prefer, the ghostly sound of an owl in the darkness, or the sounds of a mobile?

Julie,I have pheasant by the hundred in and around my neighbourhood bred for shooting. I also have buzzards in my neighbourhood. The local gamekeeper seems to leave them be as each spring the adult buzzards can be seen chasing the youngsters off.

Howard Owls can be painted like humans in profile or looking to the left or right not full on that's what I meant. I recently completed a painting with an owl showing one eye. Julie - I don't know much about the reasons for the decline in birds and animals other than poisons in the atmosphere and chemicals used in farming. I think it is sad all the same. I am sure the powers that be will find the answer - I do hope so.

It isn't just birds though is it ?, it's anything that can be remotely perceived as being a source of protein, or if not a direct source in itself, then a potential threat to our established sources of protein. For instance, just recently, a cull of the badger population was mooted in Cheshire, as the badger is considered to be a health threat to cattle evidently...Space on here doesn't actually allow a mention in length of the fox, the hedgehog, the hare, the rabbit or the mole unfortunately, but it would appear to me that the days of coexisting with our fellow creatures are tragically a thing of the past, or pretty much so in this country. And it's even worse on the continent. Come September 22nd in France, it isn't safe to walk in the garrigue without a hi-viz vest. They'll blast away at anything. Half a million wild boar per annum, and a similar amount of deer I've read. Not to mention songbirds. I'll admit here and now that I love France, but for me La Chasse stinks. I've witnessed personally the barstewards shooting song thrushes. There isn't much you can say though, as it's their country. And it's even worse in Italy, and many other Mediterranean countries. Despite the practice being illegal, they still continue to trap millions of migratory songbirds in nets and sell them to restaurants for the obscene delectation of their despicable clientele. If anyone should think that I'm making this up, every word that I've uttered can be verified by just looking on the Internet. I wouldn't recommend Maureen looking though. In short, as a species, in my view anyway, Homo Sapiens is little more than a shower of [ deleted by admin ], and considering the atrocities that we've perpetrated over the millennia, and still continue so to do, then total annihilation of our species would be a just reward for the crimes committed....Roll on the apocalypse I say.......I do hope this post doesn't come across as being a little too ' heavy'.

Anne, if where are , you have somehow found a balance, then this is all I am saying .
The greatest treasure I still hold , was standing in a field , all alone , looking up at a skylark. What a privilege..

I'd just like to add that, although I know very little about barn owls, from what I've seen of them, they appear to me to fly at very low altitudes. No doubt someone will inform me that I'm mistaken, but I've personally witnessed them flying across motorways, in the early hours of the morning, at a height of, barely exceeding in my estimation, twelve feet above the carriageway....Now given that the height of most L.G.V's often exceeds fourteen feet, then presumably the survivors, should there be any, will adapt and evolve to fly at greater heights.....I think this is how natural selection works, but, as ever, I could be wrong.

Ozy,I have seen the footage of the poor little birds being trapped in those nets...there will never be anything on this planet as cruel as Homo Sapiens ,of that I am convinced.going slightly..but only slightly off the subject,why isn't something done about the dog meat trade in Indonesia,opening my I-pad yesterday morning ,I and everyone else was greeted with the sickening photos ..I won't go into any more.its all about money at the expense of poor dumb animals....that's my rant over.

You're spot on Veronica, it's farming technology and chemicals that play a big part in the decline of our birds. With all this modern farm machinery little is lost ie seeds from the fields and the way corn and wheat is stored. So the mice/voles etc suffer and so does country birds. But we can help by putting seeds, nuts and fat balls to save our garden birds this winter. Garden birds sutch as blackbirds, sparrows to name two are really declining fast. With all the modern roofing, soffits and fascias on our houses, Starlings have little places to nest. But farmers are doing what they can to help. Loss of habitat and lack of food is the main reason for the decline in our birds and animals.
Sad I know, but true.

I do as much as I possibly can in my garden Garry as Monty Don says 'don't be too tidy' in Winter. Leave pruning till Spring. Stray leaves,branches and twigs are shelter for creatures. The birds always have 'fat balls' available. The little buggers prefer GeeTees rather than B&M ones though!

My hubby spends a small fortune on the birds..in a Rhodi tree just outside,he hung five feeders....but ..our cat ( a born hunter) and a stray was always trying to get to them,so chicken wire around the tree was the order of the day.he fills them twice a day..and puts fat balls,bread and more seed on top of the bathroom which is added onto the house,and that's done twice a day..so if anyone calls to our house and sees a ladder outside the kitchen window,it isn't a burglar..just so you know.lol

I suspect Garry has a point.

I suspect it would be awful without birds.

Maureen I've stopped putting bread out because someone on here said its not good for them. I believe it swells up in their stomachs.

Veronica,I read that as well, on a placard at Southport marina it advises not to give bread to the swans ,but oats ..so we took oats instead of bread..they wouldn't touch the oats ..I came home,straight onto Google and it said that some bread was fine..they mostly have nuts,seeds and fat balls..sometimes I'll put seeds in with lard,that they seem to love..I was buying them suet..but it's rather expensive..I always put the bread in the blender so they're not massive pieces..the things we do eh..I always think of my Dad saying to my Mam" Ann don't buy white bread for them,they only like brown"

Have you ever considered trying them with one of those M&S ready meals Veronica? I can recommend the chicken Provençal, and It only takes half an hour in the Aga. Have I mentioned my Aga previously?...I suspect I may have done actually.

I wonder if M&S make the 'fatballs' if not I may send them an email suggesting they do. Perhaps they will do 3 for 2 for the dear little feathered friends. I already have the seeded loaves Maureen - I'll try crumbling it and see what happens. Only the best is good enough for our little birds.

Fat balls?,...seeds in lard?,...Maureen, you'll have 'em all keeling over and toppling off the perch with coronary thrombosis. Chicken Provençal, that's the stuff to give 'em, and it only takes half an hour in the Aga. I take it you've heard about my Aga?, Just in case you haven't, then just type in, ' Ozy brags about his Aga again ' on YouTube. I suspect Howard's already seen the video.

Bread does not offer a balanced diet and proper nutritions for birds. Fats supply birds with energy, essential fatty acids are the most concentrated energy source. If you do put out bread, only put out enough a day and brown bread IS much better than white. Always tear bread in small pieces before feeding any birds.

I suspect Howard's a fool.

Thanks Garry -very informative. There's nothing nicer than seeing the birds flying into the back garden for a feed.

The reason that I put bread crumbs out is that we have that many birds coming in our back garden is at the end of the day they've eaten everything that has been put out for them..and if there's bread crumbs left its better than nothing.Id hate to think of them falling off their perches in the night due to lack of any food..as I said previously my hubby feeds them every morning sometimes in the afternoon and every evening but again as I said previously,it's nearly all gone by evening,we just can't keep up with them..hence bread made into crumbs by putting the bread (brown ) in the blender they bring us an awful lot of pleasure.

I bet they all meet up and say lets go to Maureen's garden there's a 'Hooley ' going on -we'll have a blast!

Good on you Maureen.

You could be right Veronica..the Rhodi tree is alive when they all land together.

Thank you Garry..we all hope to do our best.

I suspect some commenters are behaving suspiciously.