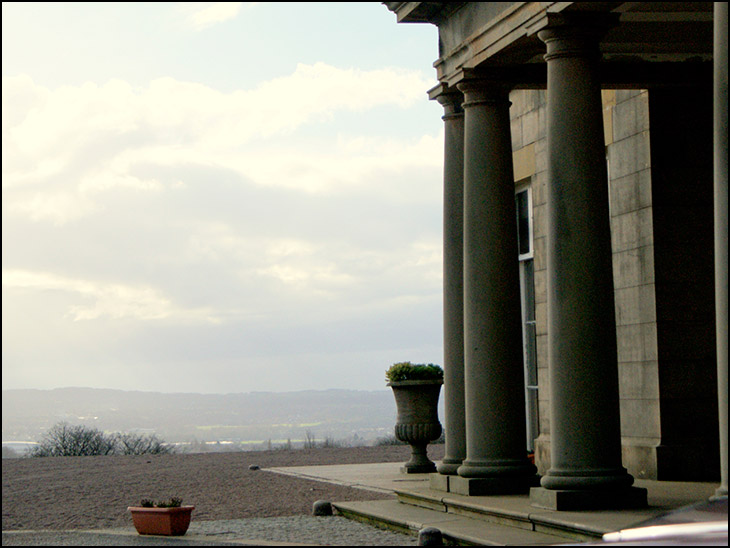 Another one of my favourite places i like thanks Ron.

Make the most of it Ron, I suspect it won't be long before the hoi polloi are denied access to the area immediately surrounding the hall. The gates are going up as I speak, and the alternative paths have already been constructed. So much for it being gifted to the people of Wigan.

brilliant photo, shame about the brown tub looks out of place, where are the gates going up Ozy?

Ozy, the People of Wigan have been badly let down by the Council of Wigan who have shamefully neglected the Hall and Plantations over many years. They did the same with Mesnes Park, but thanks to a Lottery Grant and a lot of hard work by some of the same People of Wigan the Park has been given a new lease of life.
Lord preserve us from Politicians of all kinds.

Close to the railway station Mavis, where the new driveway from Mowpin lodge meets the old one coming up from the plantation gates on Wigan lane.

This blame the Council /Goverment always annoys me. All the Goverment and Councils do is distribute tax payers money to various departments and to what has greater priority.
When tax payers money is not enough we are forced to borrow passing the debt to the next generation. Our duty is to pass onto our children a better world is it not? We expect a fantastic Health and Education service . We expect our roads to be free from pot holes. It is only through the money we as a country earn, clean and outright, not borrow , can we fund the above neglected. Blaming to me is a cop out and an excuse for our own incompetence.

Julie, if you asked the taxpayers of Wigan which they would rather have their taxes spent on, a new roof for the Town Hall or repairs to Haigh Hall, which do you think they would choose?
Are you sure you're not just pushing Garry's buttons again? Would the world be a better place for the next generation without Haigh Hall?

Hiya Julie. I feel inclined to agree with certain aspects of your statement. First of all I would agree that any government is only as good as the people that it governs. And if I'm being entirely honest, we're something of a shower aren't we ? We tend to vote for whichever party offers the promise of a low rate of taxation. Ipso facto, we end up with the tail wagging the dog. We want clean water, a visible police presence, a decent health service and a 5 pence in the pound basic tax rate. We want all this, as well as two Range Rovers parked on the driveway. But it just doesn't work, it never did and it never will. Nothing in life is free, but unfortunately, people are reluctant to accept this as a fact. It's merely the basic greed that is inherent in human nature and nothing will ever change it. It's the same with discarded cans, bottles and other items of detritus. People tut! tut! and complain about the state of society then walk on. Not many people take the trouble to pick the stuff up and deposit it in the bins, which, incidentally can quite often be few and far between, but there are a few people, and I just happen to know one or two of them personally. These are the unsung heroes that should have a position on Wigan council but don't unfortunately. The majority of people take the view " I didn't put it there, so therefore, I'm not shifting it. ", or, " I pay my council taxes, it's someone else's job to do that ". As long as this mindset prevails, we're going precisely nowhere. In short, the residents of Wigan, or indeed, any other area of the country, need to wake up to the fact that their environment is their own responsibility and not altogether that of the council. That said, DTease is perfectly correct when he says that the hall and the plantations have been shamefully neglected for many years. I know, because I've been going in there for many years. To my mind, Wigan Council has the same problem as does the NHS, that is, it's top heavy with administration, i.e. too many chiefs and not enough Indians. We can't all be the boss, although everyone appears to want to be. I've spent my entire working life in the private sector. What a mug. How much better would life have been working for the council ? Flexitime, paternity leave no doubt, early retirement, index linked pension, and a host of other benefits that I can only dream about. Unfortunately, this is Wigan, and in Wigan there is no viable opposition. They're still taking 90 quid a month out of my account for sodall that I can see, and to end on a pessimistic note, I don't see things changing much in my lifetime either.

Ozy, you are a real philosopher.
I emigrated from Wigan (and the UK) for just the reasons you state. I look forward to reading more of your opinions.

Perhaps Socrates would be more appropriate for your pseudonym Ozy!
Well written as per usual!

Yes, well said.... we all want all things but of course, it's impossible.So right about there being no realistic opposition in Wigan to a council which loves blowing its own trumpet but keeps schtum when it has made a cock-up.

Ozy, I remember once seeing a barge on the canal and the owner of the barge had named it 'Soddem Hall' I don't know who the owner was but I imagined him to be someone newly retired from a lifetime of toil and this was his parting shot to the world before he sailed of into the sunset. It gave me a warm feeling somehow.

Will ,give this hotel two maybe three years it will then be boarded up like many others.

Well said ozy ,but isn't it a pitty MPs who turn up day after day in the House of Lords and claim there £300 a day on top of there fat pensions just to sleep for a hour before moving on to there chosen gentlemens clubs for the afternoon ,I think a lot of this money could be spent on the things you mention in your points of view .