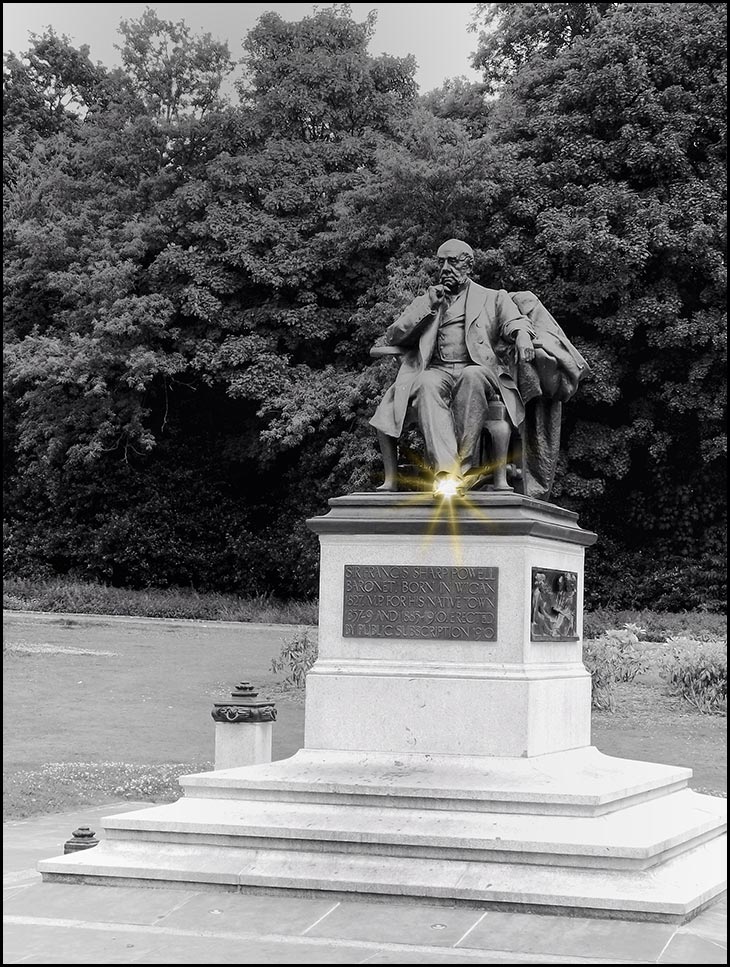 I know that I have done my share of rubbing the toe, in the past but that shine is a bit much.

Youv spoiled this one Neil

Neil,that is just brilliant and would
win any competition..I just have to
keep looking at it.

ha ha Must be photoshopped but very good!

Oh no, camera tricks. Not you Neil.

Excellent shot Neil, a good use of monochrome.

Brilliant love it!!
Rubbed this shoe for luck more ties than I can remember.
Loved playing in Wigan park many happy days sent in their as kids.

Ken R, Mick and Garry, I know exactly what your mean, but I think there are quite a few conventional pics around, but mainly, this photo expresses the impression of what I was seeing when I was walking the park, better than a straight forward shot. I fully expected that it would divide opinion.
I have posted some links to more conventional photos on yesterday's P-a-D

A good photo ruined by trying to be clever. Colour bring photos to life, the trees, plants and lawns on a Summers day. Sorry Neil, it's a no no for me.

Well I think its Brilliant
Brings back very happy childhood memories.
Because the shoe realy did shine like that when I was a little girl
Thank You Neil x

Neil its not what I would call a good centralized photo to begin with before you started to muck around with it.

What happened to bottom right of the plinth.

For the purists the original is here:-

How is that done, the sparkle i mean?

When I was a child, it was forbidden to touch that foot. I don't know when the rule was relaxed.

Mick - I thought it wasn't a photo contest?

Oy, It's not a contest, on the other hand I did not want to suffer too much in comparison with your excellent photo P-a-D 4th Jan 2014 :)

Ann, any photo-editing software that simulates a lens flare should do the trick.

Special Star lens filters (with a suitable camera) can be used when there is a obvious point light source or bright reflection.

Some snappers like the one at 11:25 are always trying to kid us with cartoon tricks photos, Superimposed rubbish. Most on here like straight genuine shots of in and around Wigan.

Alan, you should then be pleased that I posted a link to the original at my comment at 10:30, for you to enjoy, or not, as your fancy take you.

Alan - Photography is a very broad medium. Acurate record shot - arty farty shot - somewhere in the middle - surely there is room for more than one narrow view of the world?

Not as bad if the shoe didn't sparkle. but colour for me too.

I think it's great, every thing looked black and white when I was a kid but that shoe always seemed to shine when I rubbed it.

Sir Francis Powell has a torch shinning through his shoe...how wonderful.

I like this photo very much ,equally I respect the opinions of those who take an opposing view, This part of a little story I wrote some time ago for school project.

Mid nineteen fifties, Sunday afternoons without fail, I, along with a collection of cousins, walk to Mesnes Park. Church out of the way, and armed with coppers earned throughout the preceding week, going errands, for neighbours, or on a particular good week, shillings from the rebate, after the gas meter had been emptied. This time of wealth alas, only occurred infrequently. I know more than one school pal, who decided that the collection money meant for the redecoration of the church, would be better spent in The Park Cafe, "anyway it's only tuppence and won't be missed", said to justify their misdeed. I must confess to being tempted to follow their lead, but after much soul searching, concluded that eternal damnation, and the fire that never goes out wasn't worth risking for a few pence. Catholic guilt I suppose!

On reaching the park gates, the race was on, to reach the statue of Sir Francis Sharp Powell. Each believing the story, that if you rubbed his foot and ran round the bronze figure three times, you would find a sixpence. I can't remember feeling disappointed when week after week the promised reward failed to materialise. However, I can still remember the excitement when the predicted dividend, almost transpired. That particular Sunday, I won the race, and having completed the ritual, made my way towards the cafe. As I made my way along the path (no waking on the grass in those days). In the distance, glinting in the afternoon sun, I see what I convinced myself was the long looked for tanner, alas to be crestfallen, on discovering the windfall was only a threepenny bit. After initial disappointment, I am pleased with my find. Hence from that day, I have believed that this local piece of folklore is half right!

The Daily Star (sorry comic) would love snappers like you people, it's full of superimposed junk images.

What even the trees and grass looked black and white, Mac???

It's all to do with individual, and I'm a individual and I like it, just because it gets people going especially the photographers that stay in the guide lines of photography.

I'm with most on here, no trick shots...what's seen in reality should be shown. This would have been a great colour shot with the background in leave. The foot spoils it for me...but who am i.

Maggie the rule was relaxed as soon as
you could reach it yourself !!!
Happy memories!

Nev, your opinion is as good as anyone else's . See my comment at 10:30 to see the colour version, if you want to.

I rubbed that shoe and made a wish; my children rubbed it and my grandchildren have recently rubbed it, as have countless Wigan children. I hope all their wishes come true.

This photo has caused quite a stir! Personally I like it. The point of the photo is to highlight the tradition surrounding this statue. Most real Wigan people will know the reason behind the shining foot and I believe the motive behind the 'magic' was to enhance this memory. Off course it doesn't real sparkle like that but probably does in people's childhood memories. Well done mate for making me smile and bringing said memories back to life. Thank you.

I used to be in the top set at school for spellin,you woodnt think sew wood you , thanks fur spottin that

You need to go back to school with that sort of grammar, Daisy.

Garry's great, I for one love he's comments, there's no harm in him{:

P.S. This now reminds me that I was given an early flashback before the first Christmas I was in Canada, when I took my daughter to see "Santa Claus" at the "real Santa" at the downtown Eaton's store in Toronto....A statue of the founder, Timothy Eaton, an Irish Immigrant, in a very similar pose to the above image of Sir Frances.-His boot toe was similarly polished!!!

51 comments!!??
This statue is certainly popular!