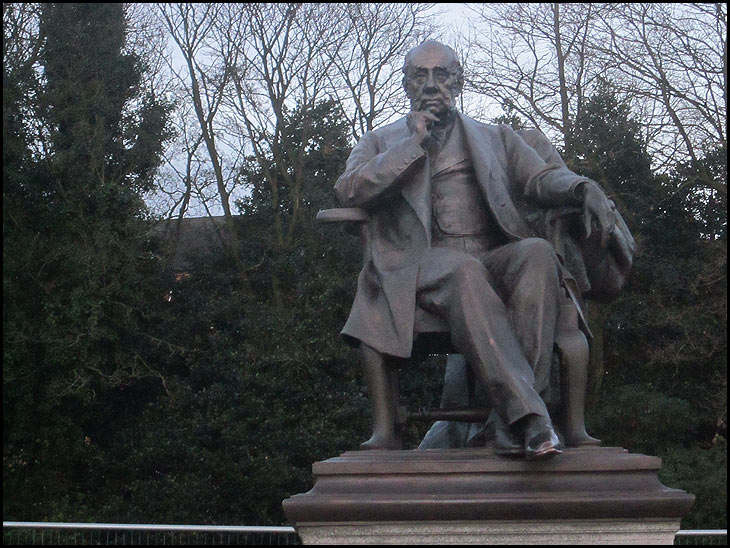 Brilliant just like the toe of his right foot. Rubbed it every time I was in the park. Thanks.

May have passed it as a little girl but don't remember....
Thankyou for the update Tom, a lovely picture, strong presence!!!
Cheers!!!

Powell was the son of the Rev. Benjamin Powell of Wigan and his wife Anne Wade, daughter of the Rev. T. Wade. He was educated at Uppingham School, Sedbergh School and St John's College, Cambridge[1] He was called to the bar at Inner Temple in 1853, and practised on the Northern Circuit. He was a J.P. for Lancashire and the West Riding of Yorkshire.[2]

He was next elected MP for Northern Division of West Riding, Yorkshire in 1872 but lost the seat in the 1874 general election.[4] He was elected as MP for Wigan at a by-election in January 1881, but was unseated on account of corrupt practices at the election.[5] He stood again for Wigan in the 1885 general election and was elected. He held the seat until the January 1910 general election.[6] He was a member of the Royal Commission on Sanitation and was created a baronet of Horton Old Hall in 1892.[7] Powell was a benefactor to Wigan and Sedbergh Schools and was chairman of the governors of Sedbergh for over 35 years.

Powell died at Horton Old Hall, Yorkshire at the age of 84 and a statue of him stands in Mesnes Park in the centre of the town of Wigan.

Powell married Anne Gregson of Toxteth Park, Liverpool in 1858. He had no heir to inherit the baronetcy which became extinct on his death.

And Dave Whelan was born in Bradford Yorkshire both well known Wiganers.

Just think of the thousands of children and adult that have rubbed that foot. I do every time I come back to Wigan

Theres 2 videos here of him, one of them is somebody rubbing his lucky shoe.

Tom, looks monochrome on my laptop !!
This statue must be a strong candidate for the most photographed object in Wigan.

The real Sir Francis
We've touched his foot for luck for almost 100 years.
And the statue of Sir Francis Sharp Powell is one of the most popular features of Mesnes Park. Little wonder we were furious a few weeks ago when some mindless vandal covered him with paint.
But he's all right now.
But who WAS Sir Francis Sharp-Powell? Who indeed?
Most of us know that he was Wigan's MP ... but there the trail runs out for those of us who haven't bothered to rummage through ancient books at the History Shop.
Now, thanks to Wiganer Tony Littler, I can tell you a little bit about this wonderful historic figure who actually unveiled his own statue a year before he died on Christmas Eve, 1911.
He was born at Horton Hall, Bradford, in 1827 and was the oldest surviving of 11 brothers. His father was the vicar of St George's Church, Wigan.
Francis went to Wigan Grammar School until 14 when he moved to Sedbergh Grammar School, passing for Cambridge at 18.
In 1852, he unsuccessfully contested the Wigan parliamentary seat. In his lifetime he contested 16 seats and stood in three bye elections ... a record in those years.
On Queen Victoria's birthday in 1892, he was made a baronet.
Sir Francis had two hobbies – health and education – and he stood by Wigan Grammar School in many troublesome times. He involved himself in the building of the new school in 1879.
Sir Francis retired in 1909 and was delighted to unveil the statue of himself looking thoughtful and wise.

Hi thomas, what work has been done to the statue? Thanks

Was this the statue that was dumped in the Parks Department Depot some while back ?

I think we can all remember giving Sir Frances's shoe a rub !

We were not allowed anywhere near his feet when I was a child. Strictly NO GO. Good to see him again

A SIXPENNY WISH.
Tom Walsh.
This a true story,I hope people don't think
to long to be on Photo-a-Day.

Mid nineteen fifties, Sunday afternoons without fail, I, along with a collection of cousins, walk to Mesnes Park. Church out of the way, and armed with coppers earned throughout the preceding week, going errands, for neighbours, or on a particular good week, shillings from the rebate, after the gas meter had been emptied. This time of wealth alas, only occurred infrequently. I know more than one school pal, who decided that the collection money meant for the redecoration of the church, would be better spent in The Park Cafe, "anyway it's only tuppence and won't be missed", said to justify their misdeed. I must confess to being tempted to follow their lead, but after much soul searching, concluded that eternal damnation, and the fire that never goes out wasn't worth risking for a few pence. Catholic guilt I suppose!

On reaching the park gates, the race was on, to reach the statue of Sir Francis Sharp Powell. Each believing the story, that if you rubbed his foot and ran round the bronze figure three times, you would find a sixpence. I can't remember feeling disappointed when week after week the promised reward failed to materialise. However, I can still remember the excitement when the predicted dividend, almost transpired. That particular Sunday, I won the race, and having completed the ritual, made my way towards the cafe. As I made my way along the path (no waking on the grass in those days). In the distance, glinting in the afternoon sun, I see what I convinced myself was the long looked for tanner, alas to be crestfallen, on discovering the windfall was only a threepenny bit. After initial disappointment, I am pleased with my find. Hence from that day, I have believed that this local piece of folklore is half right!

Helen I think you mean the old Boer War memorial statue that used to be on a plinth near the pavilion. That was removed sometime in the 60s.

Ernest theres a plaque on the statue saying this,,,,

You can read about him and see the photo of the plaque on Wiganmans website.

Ben, I've tried ringing Wigan Council main switch board , not manned today a recorded message directs you to another number I have l did eventually speak to someone ,who said the department was closed until the 2nd. of January . I find it incredible that its not possible to speak to council staff ,presumably because of Christmas holidays . I appreciate that lesser workload makes it attractive to allow staff to take some of their annual leave over the holiday period , but it is incumbent on management to make sure that each department has a skeleton staff ,on days other than Bank Holidays to deal with enquires , some,unlike mine could well be of a very important nature with significance for the town. When they deign to take calls again I shall try to ascertain what the restoration involved, and the cost incurred .

Does anyone know why Boer War Statue was removed and what has happened to it?

Mick and viewer`s, you can read all about him on :-
http://www.1reading.com/online_library6/P_Hulbert_Henry_L/Sir_Francis_Sharp_Powell__Baronet_and_Member_of_Parliament__a_memoir.mp3.7356/?page=1

Derek, the Boer War memorial statue (of a man) had an arm missing and always had in my lifetime. I believe the statue was removed because of the damage and dumped somewhere, that would have been in the mid to late 60s.

Ernest, invest in a new laptop or some new glasses, that,s twice in a few days you,ve seen monochrome when it isn,t. There,s green in the trees, blue in the sky, bronze in the statue.

Roy, I didn`t say it was monochrome - I knew it wasn`t and said it looks like monochrome - hence the exclamation marks.

Try getting hold of a Wigan councillor during the 'festive season' Rarer than truffles.

Thomas (tom) walsh....The mid 1950`s was my "treat" on sunday afternoons in mesnes park,All dressed up and vimto in the cafe Lovely memories.No litter,no "yobs" no bad language in coversation.
Good days.

wow lots of comments on this man,the other shoe needs a shine also,

I took a photo of it last May when I was in Wigan but I didn't put it on facebook because it was covered in graffiti. Looks like they did a full clean up and he's looking good...rubbed his foot many a time and fed the ducks!

If this statue can be removed & refurbished why can't the Boer War Memorial have had the same treatment.

Its an insult to the men who fought & died & the people sought to remember them, even thought it was long ago.

In the late 50s early 60s, it was a ritual for all young people to parade round Wigan Park on Sunday afternoons, as it was on Sunday night round King St and Library St after the Pictures had let out, before catching the last bus home

Marie M And it was all so innocent then.!lovely days.

lizzie, the park is in the prosses of being done up and the lodge/ gatehouse has been long time in disrepair years and years, but i am glad to say they are renovating to its former glory its nearly finished now i cant wait to see it x