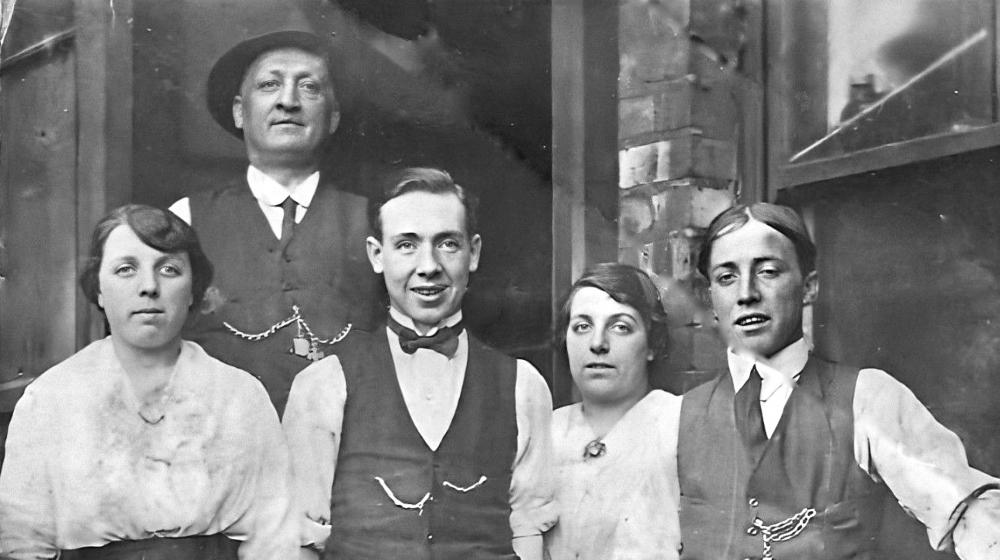 William Halliwell ex-Wigan RL and Family
Photo: Keith
Views: 164
Item #: 33047
William (Billy) Halliwell standing at the back with some members of his family. Billy, according to the 1911 Census, was the Hotel Keeper at the White Lion in Standishgate, where this photo was taken at the back of the pub. At the time he would have been 45 years of age.

Billy had a long career with Wigan Rugby League Club from 1887 to 1904, playing some 203 games, scoring 9 tries - he would have played a lot more games, since appearances before 1895 are not recorded. He seems to have played his last game, aged about 37 years of age, in April 1904 against Runcorn.

He started as a half back and his nickname was “smiler”, he enjoyed a long and successful partnership with John Mitchinson. Later, Billy played in the forwards, and extended his career.

Billy married at St George’s Church in September 1889, aged 22, he was a Collier, living at Upper Morris Street. His wife was Elizabeth Alice Halliwell (Marsh), aged 20, who came from Russell Street, Ince in Makerfield. In 1911 they had 7 children.The children were named Frederick, William, Selina, Elvina, Elizabeth Alice and John. Sadly, it appears that Billy died relatively young aged 56 in 1922.

It’s possible, I think, that one of his sons, William also became a Licensee at the Abbey Lakes Hotel, Orrell Road, Orrell. He was there in the 1939 Register.I have used Census records to put some of this information together.
Back

Not sure how the above photo, I have already posted, ended up appearing twice. I can assure everyone I did not submit it twice. Apologies to all.