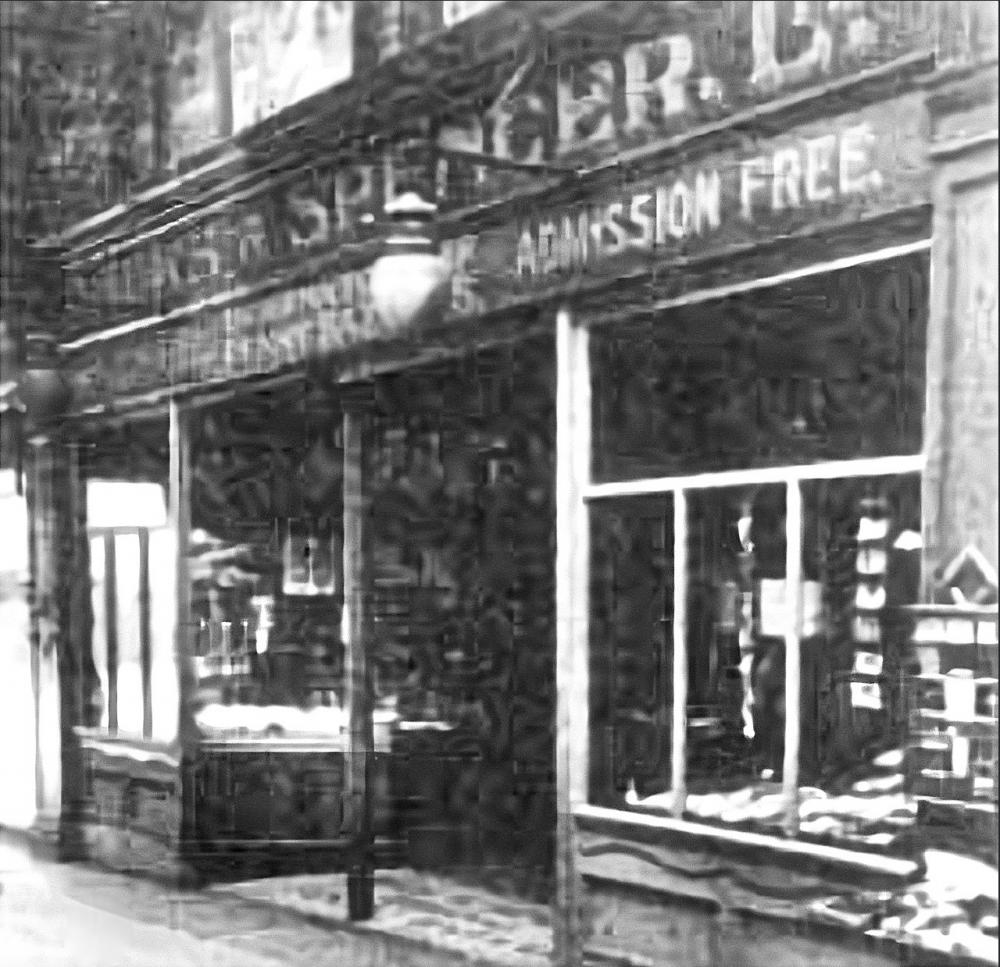 M & S Store 1899 at 29 Makinson's Arcade.
Photo: Keith
Views: 1,437
Item #: 33000
I'd heard that this Wigan M&S store was the first to be set up indoors. I decided to try and check it out. This was the reply I got from M&S's Company Archive.
"Thank for getting in touch about our early M&S Wigan store. This is what I could find out about our early Wigan market and store:
In 1891 Michael Marks moved to Wigan, where he opened a Penny Bazaar in the Market Hall.
Marks also established a warehouse in Wigan as a centre of distribution.
This first Penny Bazaar closed in 1909.
A second branch opened at 29 Makinson Arcade in 1899, and remained open until 1931. This was an open-fronted shop with one island counter and three side counters.
In answer to your question around Wigan being the first shop to open, our records show that we opened a shop at Cheetham Hill, Manchester in 1894 which would predate the opening of the Wigan shop in Makinson Arcade in 1899."

According to the Marks & Spencer company history (widely available online) Michael Marks opened his first market stall in 1884, in Leeds.
He then went into 50/50 partnership with Spencer.
Together, they opened stores across England from Manchester to Birmingham and, by 1897, they held a total of 36 stalls and 12 retail stores, becoming a limited company.

So, the Wigan store, open in 1899, could only have been the 13th Marks and Spencer store to open, at least.

The "Wigan was the first Marks and Spencers" myth has been covered on Wigan World many times, always ending with the fact that it definately wasn't.

This some research I carried when the Wigan Store, was about to close
I thought it may be of interest
Marks & Spencer.

Goodbye to St. Michael and all that !

As we approach the end of trading at M&S in Wigan town centre it is timely to look at the company's long connection with our town . I am aware of the sadness felt by everyone about the closure and it's possible consequences . I hope this potted history will be of interest to readers.

Wigan played no little part in the expansion of the company .The story however begins in Slonim in the Russian partition of Poland . Michael Marks left his home age 19 and came to London to start a new life. He soon left the capital and headed for Leeds, there he met Isaac Dewhirst, the owner of a Leeds warehouse, in 1884. A deal was arranged whereby Marks agreed to buy goods from Dewhirst and sell them in nearby villages. The venture was a success and enabled Marks to raise enough capital to establish a stall in Leeds' open market. He also sold goods at Castleford and Wakefield markets. In 1891 he opened a stall in Wigan Market Hall . The family also moved to live in Wigan about that time. They made their home at 152 Great George Street where his daughter Miriam was born on 1st February 1892 ( Died 14th February 1972) . An interesting fact on her Birth Certificate Michael's signature is marked with an ' X '. They also resided at 57 Darlington Street before leaving Wigan for Manchester in 1896.

On 27th March 1897 the Mayor of Wigan Councillor Robert Richards and the Chief of Police , Captain A Bell confirmed to the Home Office a period of residence of Michael Marks and gave a character reference in connection with his application for naturalisation. On 5 May 1897, Michael Marks was naturalised as a British subject.

Why Wigan from Leeds ? I think it's fair to assume two factors would have influenced his decision, the opening of The Wigan Market Hall in 1877. Covered markets were a fairly new phenomenon allowing trade to be conducted six days a week, instead of just on market days . The second I feel sure was that there was vibrant Jewish community in Wigan at that time with its own Synagogue situated in Great George Street, probably in a converted house and the street where he made his home ,it is surely too much to be just a coincidence !

To digress briefly ; it was reported in The Wigan Observer on 28th. of October 1888 the Rabbi of the Wigan Synagogue ,Rev Bercovitz a Russian -born pastor to Jewish community was killed in Wallgate when a horse escaped from its cart . The cart veered off the road and hit the reverend gentleman killing him instantly . He left a wife and five children , the newspaper went on to describe him as being held in great respect not only by his all his flock but by all who knew him. I include this to illustrate how assimilated the Jewish community had become in Wigan at the later part of the nineteenth century .

The business was expanding at such a rate that Michael Marks required a partner and capital - enter Tom Spencer , a bookkeeper at Isaac Dewhirst who paid £300 for a half share of the business consisting of 8 Bazaars and a a warehouse in Wigan on the 28th of September 1894 , Marks and Spencer was born in Wigan .There is some dispute as to where the (new)company was founded ; it is claimed the first Bazaar to bear the joint name was on the Cheetham Hill Road shop, Manchester and is reputedly the site of the foundation of the (new) company .
I contend that notwithstanding that claim , the fact that Michael Marks lived in Wigan and the warehouse was in the town when the partnership was established ,Wigan's claim to be the birthplace of the (new) company is in my opinion indisputable. In M&S own archive it reports that the first shop was opened in a Leeds Arcade in 1904 that is clearly inaccurate. The Manchester shop opened 1896 and by 1900 the company had 36 outlets including 12 shops the others being market stalls. That year saw the opening a Bazaar at 29 Makinsons Arcade . 1918 saw a shop opened in Standishgate . On the 2nd of October 1931 the business was transferred a much larger store at 11 Standishgate (sight of the present store ) at the same time the Makinsons Arcade Bazaar closed

In Israel Sieff memoirs , he recalls that his friend and later brother- in-law Simon Marks son of Michael related that during his time in Wigan , Simon then aged four after hearing the patter of clogs on the cobbled streets begged his Father for a pair, many years later he wrote, ' At night I would wrap them up in brown paper and put them under my pillow, I wanted be like the other children ' Both the men mentioned in this paragraph went on to be chairmen of M&S and both were given life peerages . Simon during his tenure adopted the brand name ' St Michael ' in honour of his Father.


The profits generated in Wigan and the other early outlets sowed the seeds for the company as it is today . You cannot but wonder what Michael Marks and Thomas Spencer would think of the decision to abandon Wigan centre after 125 years . Abandon is an emotive word I know but that is exactly how it feels to the people of Wigan . The company had an enviable reputation for caring for staff and customers alike, that accolade is beginning to look a little thin .

I'm aware that the company is to open a food only outlet at Robin Park and whilst this is welcomed by many it will surly lead to a further exodus of footfall from the town centre threatening other businesses . This move to out of town shopping is by no means confined to Wigan it is a country wide trend . However much we lament the degrading of town centres and think it should be reversed , it's rather like King Canute trying to stop the tide; or the more modern version of that maxim ' trying to put toothpaste back in the tube ' - sad but undeniably true .

Thank you for the confirmation James.

What a photo Keith, thank you.We all loved M&S. I had to smile at the sign Admission Free,can you imagine having to pay to go in?? I remember my auntie buying me a very posh frock, for Easter.Thats what we called a dress when I was 7..I can remember skipping down Scholes going to M&S, and that frock has stuck in my mind to this day..By the way Tom, thank you.You always have a good story to tell.Just goes to show what a picture can evoke.

The Marks & Spencer company have compiled a comprehensive history of their business, from it's origin, in partnership with Leeds University.
They are in possession of all the available written records, both legal and commercial, and photographs relating to the company's history.

Yet someone tries to prove them wrong by quoting local rumour? Unbelievable!

Edna posted, "I had to smile at the sign Admission Free, can you imagine having to pay to go in"?

It's not unusual these days, Edna. People pay over £30 for admission into Costco. Then they queue up to buy twelve months worth of washing powder in one go, just to save four or five £.

George(Hindley) . Unbelievable, the official Marks & Spencer archives contains many omissions and inaccuracies ,if I may if I may give an example on the fourth line of the archive - 1894 Michael meets Tom Spencer, Dewhirst’s book-keeper, and the two go into a partnership that ends in Toms death 1905. In fact Tom Spencer retired from the company 1903 , unbelievable!

I can recall the St. Michael label being a sign of quality and Marks and Spencers Ladies clothes.....or maybe it was underclothes....went under the label "St. Margaret" with a little picture of what looked like a nun to me when I was a little girl.

We believe everything in “official archives” until it’s proved otherwise.

Tom [Walsh] -
From the Marks and Spencer company archive -

"Tom [Spencer] retired from M&S in 1903 to follow his dream of becoming a farmer".

George ,the document I refer to can be found at
M&S History . M&S in Leeds Timeline .
Incidentally several items in the article above. The University of Leeds are unaware of ,I've been asked to forward it to them ,I will of course comply .

I am not enamoured with all the fuss about M&S one thing i do know is that there was sewing factory in Leigh and they got a shed loads of material /clothes etc from lowly countries over seas and one of the sewers tasks were to cut the makers labels from said clothes and re-stitch the M&S label in there place which just goes to prove to me that they did not give a fig about wigan and wiganers it was always about making more and more profit and bugger the consequences .