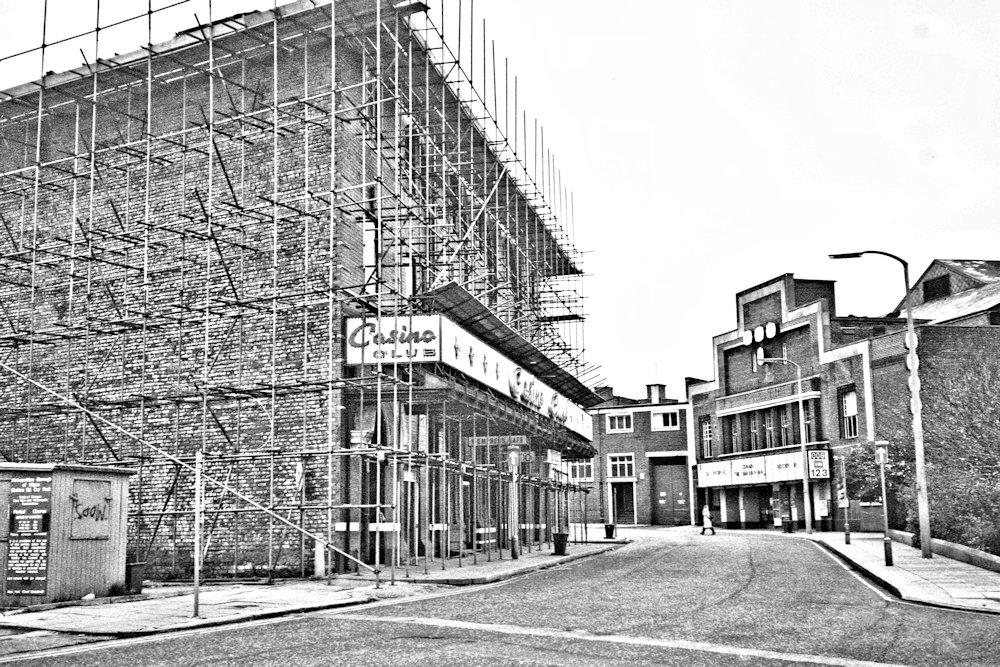 October 31, 1982 was a Sunday, so that might be the reason Station Road is deserted with no vehicles and just a solitary person. The building was the former Empress ballroom, but was more famous when it became the Wigan Casino nightclub in 1973. It only lasted eight years until 1981 when it closed forever after a fire. In 1982 the building now with scaffolding was awaiting demoition and by March 1983 it was gone. Wigan Casino attracted hundreds of people not just locally but from Liverpool, Manchester, Yorkshire, Scotland, the Midlands and even London.

The Empress Ballroom opened in in the middle of WW1 -1916 by the Atherton family and by all accounts was an immediate success so much so that only eight years later a second Ballroom was added 'The Palais de Dance '.Two events could be held on the same evening , or on nights of ' big occasions ' both would be used and caused a little confusion ,the balcony of the Empress had large double doors that lead to the ground floor of ' The Pali ' very disconcerting especially if you'd had a tipple ( or 3 ).

On the subject of bars ,the ballroom didn't have a licence to sell intoxicants, hence the Saturday dances or midweek affairs it was non alcoholic drinks only ; on Friday night dances an occasional licence would applied for on the grounds that the dance was for some particular firms /works-dance or parish dance , in truth it was a way of circumventing the licensing laws . I must confess that Friday night dances were my chosen ones, the atmosphere always seemed more friendly, I can't think why ( hic ).

Many readers will remember the sofas round the dance floor , I think they'd been in situ since 1916 ! they were the most uncomfortable couches you could imagine- springs sticking out at every conceivable angle, rough moquette covering, not to mention the horsehair stuffing finding its way to the surface ready to impale any unsuspecting legs that may seek rest from dancing , it's no wonder girls gave them a wide berth particularly after the advent of the mini skirt !

Friday nights in the mid sixties the entrance fee was 5 shillings (25p) and the cheapest alcoholic drink was cider 10d (4p). People danced till 1am to Jess Greenough and his orchestra , mid week it was Ronnie Carr and Beat Boys. When The Rolling Stones appeared in November 1963 the entrance was 5 shilling in advance or 5 shilling and sixpence on the door, seems incredible by today's silly money.

I wonder how many people alive today in Wigan and indeed around the world owe their existence to The Empress Ballroom . There must have been thousands upon thousands of marriages that happened because of a first meeting at 'The Emp ' .In the forties and fifties the venue was a particular favourite of the 'Yanks ' from their Burtonwood base and many girls from Wigan became G.I. brides .

On a more parochial front ,most 'Wigan folk' would have gone to the ballroom at sometime or other ; times were very different young men would ask a girl to take the floor in a polite way -'May I have this dance ' , the offer was usually accepted as it would seem churlish to decline, however it was made very very clear if it was to be 'one' dance only , by refusing to engage in conversation and looking anywhere apart from her would be suitor . An often asked refrain " can I walk you home " would often be rebuffed with a firm " I can't leave my friend " If they hit it off , an arrangement to meet would be made the following week . Favourite meeting places for a first date would be Woolworths Corner or Lowe's Department Store ,alas now just memories like The Ballroom itself !

When the venue was renamed 'The Casino' it also got a full licence. I was fortunate to have tickets for the opening night, the star was Shirley Bassey ,who performed fantastically ; however not everyone was delighted when it was announced ' The bar will be closed during Miss Bassey's performance '.

As 'The Casino ' it went on to find worldwide fame as the home of 'Northern Soul ' it closed in 1981 - not for lack of enthusiasm , the town council owed it at that time and had plans to extend The Civic Centre, in the event the plans came to nothing, the cost being prohibitive . People still bemoan the closure of this icon to northern soul but that's another story for another day !

The Ballroom had an unhappy ending , engulfed by fire shortly after the last 'all-nighter' . So many memories blighted by the sight of the ashes , but as we all know memories can't be destroyed ! That is clearly exampled by the remarks from Washington USA cited earlier ,the piece of the dance floor mentioned must be even more treasured after the inferno . These memories of yore will remain - when we 'tripped the light fantastic'. Where so many made friendships were made and where many, metaphorically speaking, took the first step down the aisle !

The comment missing from the article above was from - Arlene Norton Everett ,Washington USA posted on 21st May 2012 it reads -
was looking for information on The Empress Ballroom as a way of connecting with my Mothers past, she passed away in 2006. My Mother, Edna Green, was born in Wigan in 1922 and lived there until she married in 1951 and moved to America. She had so many wonderful stories about dancing at The Empress. I was surprized to see one of her dance partners mentioned here. She spoke alot of Joe Bertrand and the fun they had dancing together. I have a piece of the dance floor from The Empress that he had given to her on her last trip home. I'll treasure it forever. Thank you for the memories shared here..

Brilliant memories Tom, I was there in the semi - darkness! I recall the 'couches' I seem to remember them being Velvet? Also it was very ill mannered if you refused a dance, it would have been shameful for a lad to be refused and walk away- I could never do that..it was awful as well if your friend was asked to dance and you were left on your own....

Tom, you're absolutely right! My mum and dad met in th'Emp in 1948. My dad was in the RAF and about to be demobbed. He'd served in Burma and Singapore during the war and was tanned, my mum used to tell us. That's why she accepted his offer of a dance and one thing led to another! They married in 1950 and I was born a year later. So if it hadn't been for the Emp...

Tom,I was there every night bar Wednesday's .my Dad said why don't I just take my pyjamas and sleep there,I loved the place,when I see photos of it I can pinpoint the exact place where we all used to meet up..top left of the ballroom ..I always wished I could have had one small piece of the floor as a memento..the band was brilliant..the dancing was brilliant,the whole of my teenage years was brilliant all due to the Emp.I also went to the Electricians ball,Police ball Plumbers ball,you name it I was there,.I wouldn't have missed it for the world...and thank you for the photo.

I think the date of 1973 is when the allnighters started. I met my wife there in May 1971 and I'm sure it was The Casino then.

Great photo Tom
I have fond memories of the Emp' / Casino Club.
I first went there in 1963. Several local groups would perform on three stages alternatively - main stage, one at the back of dance floor and in the Palais De Dance.
As mentioned Shirley Bassey was there along with Tom Jones. It became the Casino and the Palais De Dance was converted into a gaming room. After awhile it reverted to a night club, attracting the likes of Lulu, Johnny Johnson, The Drifters et al.
I remember on a Sunday, free tickets would be issued for the following Monday night !
It was a great place for meeting girls and taking them there on a date.
In the pic is the ABC cinema. One Sunday night, I was walking down Station Road with mates and across the road there was a queue stretching to Woolworths to see a re-run of Elvis's Jailhouse Rock !!
Such Happy Days !!

this is where I went with my girlfriend who later became my first wife for late night dates and dances in the early 1960s I remember one night there was a photographer with a monkey so I persuaded my girlfriend to have her photo taken with the monkey and I will keep the photo next to my heart for the rest of my days. well as the photographer placed the monkey in my girlfriends arms it bit her and jumped back to the photographer and to this day I say that that monkey knew more about women than I did