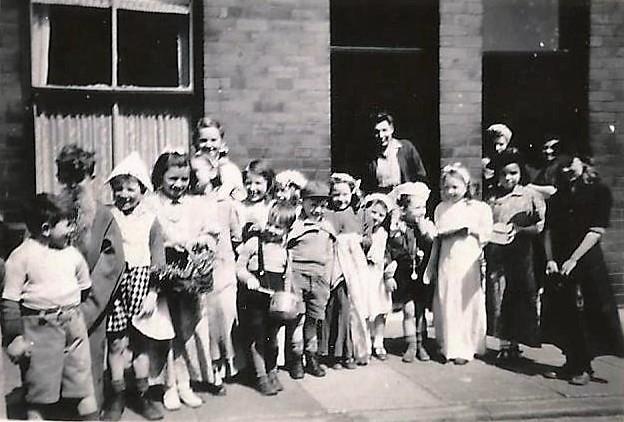 What a brilliant photo. Every street had a May Queen. We were so happy dressing up with ingenuity. Trains for the Queen made from a curtain, silver paper crowns. Chimney sweeps, Mrs Mop's, there was scope for every trade going. They were such happy times, something you never see these days.

I remember May Queens so well, where we all dressed up, and The Queen was resplendent in her Mam's net curtain and a crown made from a cereal packet! Someone carried a tin with a slit cut in the lid and we all chanted, "Please help the May-Queen" and hoped for some pennies to be dropped in the tin! Then it was back to someone's backyard for jam butties and pop. I have had many posher meals since but they have never quite matched those backyard feasts, sat on someone's dustbin. Happy, happy days!

A sight that hasn't been seen for many a long year, 'May Queens' which used to generate so much excitement and were a very common occurrence The Queen at the head with other girls holding her train , then the bit players dressed in any fancy dress they could put their hands on . Some seemed to put in more effort than others ,as you will see later in the story. Many streets would hold one if they had enough children to make a show; some streets seemed to excel .Cambridge St/ Hardybutts seemed outstanding thanks to Mrs Wigginton, a sewer who lived in Cambridge St and seemed to be able make anything from her 'off cuts bag' , thus 'The Cambridge/Hardybutts Brigade' started with a massive advantage over others with no such 'secret weapon ' ! Mrs W, was also very gifted crocheter making doilies for half the parish using a selection different coloured silks, made into daisy shapes then sewn together to make one large floral work of art. It was one of her masterpieces that would come to our streets rescue, as you'll read later !

Which brings me to my street ,Mc Cormick St, with only a few young children,certainly not enough to put on a descent parade , in such scenarios, recruits would needed to be found from streets with similarly lack of would be participants . That's exactly what we decided do on one May Day , to join forces with other streets , this on the morning of the big event ; realising we would miss out on a possible windfall from the collecting boxes that always accompanied the walk. The first overriding priority was of course was to find a Queen, no Queen no show, My street had a complete dearth of girls young enough for the position, when girls got to a certain age, about 11,self consciousness kicked in and no amount of persuading would make them take up the throne, so to speak.

The year I write about I'm almost sure was 1954 because I remember some of the paraphernalia used at the Coronation the previous year was on show. We needed a Queen - and quick. Although we devised a fallback plan of sorts. The cunning plan was to make one like a female 'Guy Fawkes' which would be placed in a tansad (push chair) to be pushed by the Page Boy . We needn't have fretted ,we secured the services of a girl from a nearby street who came complete with her own net curtain and her Mums high heel shoes. along with some lurid plastic flowers. We'd cracked it we had our monarch now for the rest of the retinue , my outfit already sorted , a 'pit man', my uncles pit helmet ' tommy tin' and soot from the side of the of the fire place smudged onto my pink cheeks . I recall our next door neighbour asking "'what shift I was on " ,this gave assurance that the ensemble was realistic. Two of the lads had gas masks , bought from Kay's Army Surplus Store' I still don't know what the were supposed to be , likewise a girl from the same street as The Queen came in her Mam's coat ,velvet hat and handbag ,when questioned as to her identity she said she'd come as 'women' ! that must of taken months of planing, me thinks !!!

Scofield Lane had quite a reasonable Prince Philip ,thanks to bits and bobs from the coronation , a resplendent Queen in full regalia also from celebrations the previous year ; we have a 'women' and a pit man ! I feared for our financial well being, donations given on how well passers by judge each parade . I must admit I didn't see Schofield Lanes effort myself, and relied on reports from 'spies ' who would go from street to street giving a running commentary and sewing seeds of discontent among the children ; come to think about it they had a lot in common with the Startsi the East Germany secret police. Back to our motley crew -several cowboys at least 2 soldiers one complete with a real bayonet snaffled by his Dad from his army days ; a nurse, from our street about 4 or 5 not yet old enough to take the responsibility of being The Queen, maybe in a few years her time will come
We were certainly a poor imitation of Cambridge St/ Hardybutts, but 'hey ho 'what we lacked in costume we made up for in enthusiasm. Our Queen however seemed less than regal the lace curtain pined to her hair with clips and forming a train for her attendants to hold while in procession,with strict instructions not to get it dirty as it had to back on the window later that day.

We needed a crown, the girl who had come as 'a women' offered to led us her velvet hat complete with a Marquette brooch as a substitute, even at the age of 9 I realised that would look absolutely ridiculous, and scuppered the idea before it took hold. We thought of making one from a cardboard box but time was against us ,we'd spent all morning gathering recruits and sorting a route out ,we didn't want to clash with another procession particularly if they were better turned out than our crew!

The absence of a crown was sorted before we processed. To the rescue came our next door neighbour Mrs Mc Hugh with the offer of a doily crocheted by the aforementioned Mrs Wigginton which when placed on the Queens head seemed to transform the whole costume ; so much so that I thought our queen looked grander than our main competitor. Another neighbour remarked that she looked like "The Queen Mother on her wedding day".That was a backhand compliment if ever I heard one; to be fair not said with any malice whatsoever , on the contrary, said as encouragement to what must have seemed a rag tag of a fancy dress pageant .

All parades had collecting boxes usually National Milk tins with a slot made in the lid. After the parade , the tins would be emptied and the proceeds divided on usually a strictly equally basis . In our case , the Queen not getting a penny more than the girl in the velvet hat who had come as a 'women', even though there had been a great variance in the effort made, 'a women ' I ask you !

Some of the better organised outfits would have a party in someone's backyard. Ours being a last minute decision lacked any adult involvement and thus Mary Bakers little sponge cake adorned with icing and hundreds and thousands , and jellies provided by Mams would not be on our 'Bill of Fare'. Ours being self organised ,we had to make our own party plan so to speak . After much debate, we decided, if we collected enough to get a pie and cake each from 'Pie Joes' in Scholes.

In the event there was enough with a few shillings over. The success of our collection was down to ours being a Saturday afternoon affair, which coincided with pubs closing time , 3pm in those days. Some of the men with what used to called 'a ten bob sway'( slightly tipsy) would be far more generous then if we caught them on their way into the watering holes. Scholes being a big mining area was fertile ground for anything to do with mining and I must say my 'pit man' went down a treat, and I'm sure got us some benefactors we wouldn't have got if I'd been a pirate!

At first there was general agreement that any surplus cash should be put in St Patrick's Church Decoration Fund Box. After our pie and cake - a few decided to spend their cake money ,on 2oz of Sherbet Lemons from Telford's Toffee Shop, reasoning that the toffee would last long after the cake had been devoured . The split of cake and toffee deciders was on exact gender basis all the girls , taking Marie-Antoinette’ advice and opted for cakes.

Then the final decision of the afternoon, the money left over after our picnic ,and that's what it was ,none of the Mothers allowing us to eat our pies indoor even though it was threatening rain, to be fair if the rain had materialised , I'm sure at least one ,my Mam would have relented.
However back to the ' kitty' the earlier decision regarding 'The Decoration Fund ' seemed much less certain , and having reconsidered, taking into account my observation,( I still feel a little guilty about putting my ninepence in) that it wouldn't even buy half a tin of paint, and I felt certain Fr Murray would rather we enjoy ourselves, after putting so much effort into our parade . It was then decided unanimously to take Fr Murray's advice,albeit notionally ; the kitty would be spent on 1p Arrows ( caramel bars) and pear drops and other such delights divided equally among the participants . Back to Telford's Toffee Shop, en masse !

Loved the May Queens parade,growing up in the 1950's in Ince,great memories of innocent times.

I remember these times, we ,loved the May Queen.Wonderfull memories.I have just shown my granddaughter this photo, she said she would have loved to have done that.Sadley everything changes.

I can only remember being in one May Queen.Iwas dressed as a baker with a white paper bag for a hat,flour on my face ,a pinny and a rolling pin.

I loved being May Queen back then, my mother god rest her soul made me a real queens dress and crown.

Tom, that was PERFECT! I felt as if I was there dressed as "women".....that made me laugh so much! Thankyou. xxxxxx

Carole,your comments are absolutely spot on !

I don't remember any of this in Haig Street, these May Queen photo's, are they from some where else ?
7ueex