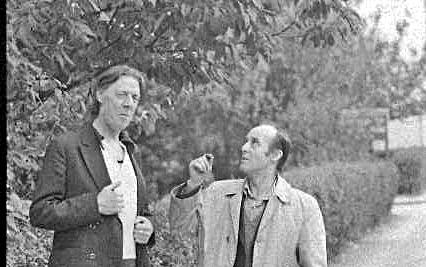 Tommy Pryle
Photo: Mark Conroy
Views: 2,401
Item #: 7776
Postman Tommy Pryle on the left Wigan Lane 1978,sure a lot of people knew him.
Not sure who the other bloke is seem to remember he had a big family.
Back

is this Tommy Pryle Brother to Andrew, Leslie, Alan Pryle

Don't know Sandra, I worked with him at the Post Office.I think he has a daughter who worked in the Co-op on Woodhouse Lane.

I knew Tommy well Mark. He could be found in the Fox and Goose after he had finished his round which covered the Wigan Lane area. The other guy in the photo is Joe Cullen who was a good friend of my grandad. The photo was taken at the front of the little park which was opposite the Bowling Green pub. You can just see the side of the Saracens Head pub back right of the photo. Oh how our little manor has changed eh Mark.

So true we have our memories but like you say all change.

Sandra, Tommy lived at Marsh Green. I don't know if he had any brothers or not.

hi sgain, i sent the pic to my cusin Leslie Pryle & asked him if it is his brother Tommy

I remember Tommy well we worked together at the Post office, I remember at Christmas it was all bed and work, we had many good nights in the Bricklayers, Tommy would get on the piano and we would all have a singalong,Agood workmate was Tommy.
I know he had a son.

Hi, yes, thats Tommy Pryle for certain. He has two daughters, Shirley and Deborah, and a son Thomas. Shirley used to work at the sewing place in the town, Coops I think, dont know if its still there, havent seen the place forever. Tommys wife was Kathleen nee Brady, whose mum and dad lived at Linney Square, in Scholes, both now sadly passed on to. Tommys brother are Alan, the youngest, Leslie and Andy. Dont know if they are still alive. Alan was the youngest brother, who married a gorgeous woman named Barbera, they once lived in Winstanley, Alan used to work for the telephone company, Barbera had three children, Jaqueline being the oldest, who I believe went on to become a nurse. Not too many know but Tommy played both the piano and the accordion, and was an MP in the Army, based in Gibralter, which he loved, leaving only to look after a sick dad, I believe, and ending working in civvy street as a postman. Regardless of his fondness for drink, he never missed a day at work, unless he was seriously ill, which wasnt often. He lived at 5 Anderton Street, until his divorce from Kathleen, who passed away tragically 5 years later. As far as I know he last lived in Marsh Green, in his old mums house, after she passed away.

I also work as a Postie in Wigan and worked with Tommy from June 1989 until he retired. He liked his cigs he could smoke inside then. Also a pint in the Fox & Goose after work.