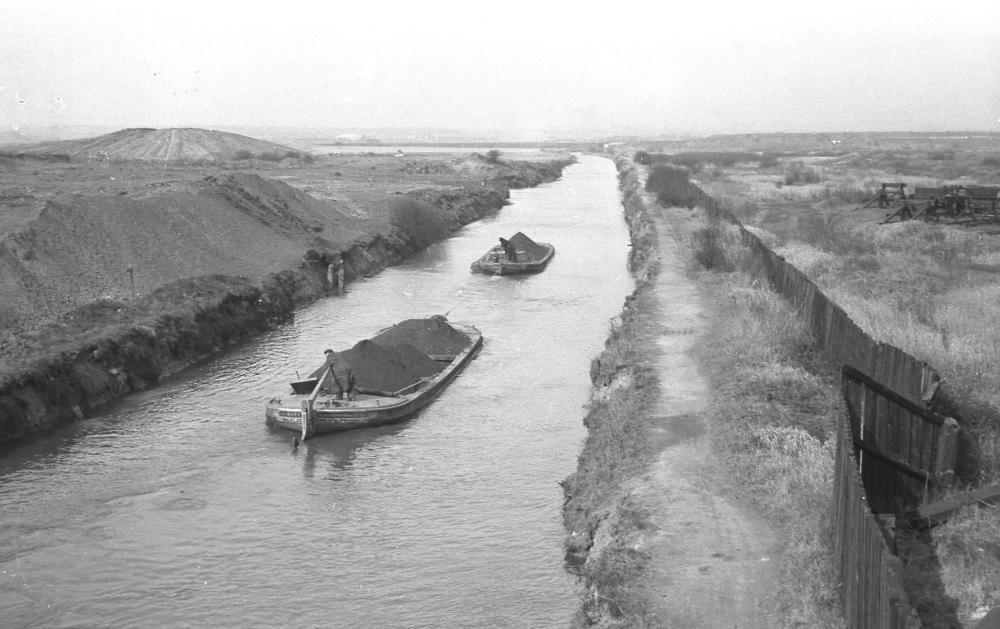 I recall these barges being featured in a regional TV news item when the service was discontinued some years ago, possibly late 70's or 80's.

What a great photo, so interesting.

A lot of barges loaded up on the canal at Mather Lane Leigh,usually one barge with an engine towed another one,and they went to Westwood,we kebbed the canal for loose coal,and sold it,a bucket with holes it,and tied to a rope was kebbing,we did it when we were lads.

That's a fascinating glimpse into the past Maurice. Cheers

Just made the whole experience all the more satisfying!

That photo was taken from the West Coast Main Line railway bridge at Bamfurlong and to the left are the remains of Bamfurlong Colliery and in the distance is the Wigan to Liverpool line as it crosses the canal and I think that the lake at the side of that railway line, is actually the famed 'Bloowaters' which were filled in during the 1960's but some 10 years ago, were partially dug out to create a artificial lake there by the landowner ...

A scar on the landscape.many scenes like this around the Wigan area at this time.

I am sure there are some on here who wish this scene was still happening. Who wants change> Why did Wigan council get rid of the slag heaps? Why did they not keep the smog and filth in the air? Too many on here are stuck in the 1940s or 50s.

No Amanda, there aren't some on here who would like this to be happening now, they are harkening back to a time when they were younger and happier.
My dad used to take me for walks along the canal at Poolstock, what I wouldn't give to be back then.
I ain't stuck in the 40's or 50's, I'm stuck in the 21st century, and what a cesspit it is

This forum is designed for looking back- hence the request for 'old' photos. Its a means of sharing memories of a time and place in history. Most people like to recall their youth and surroundings - it doesn't mean they would want to live in a 'two-up two-down' and no bathroom again Amanda. It's good to think where and how we have got to since those days - ' nowt' wrong with that!

The ' moonscape of dereliction ' apparent in this shot owes its existence to the fact that the area straddles many valuable coal measures, the rights to which having been stolen by the wealthy and privileged descendants of William the conqueror's hoppos several centuries ago. Billions must have been made over the decades by private individuals, extracting the saleable material, and leaving the waste exposed on the surface to contaminate the land, and the water courses which bisect the land. Evidence of this ( if more were needed ) can still be seen by paying a visit to the ' yellow brook ' which, despite a costly, yet reasonably effective clean up operation, still disgorges some of its ochre effluent into the river Douglas....My first question is this...Where did all the money from the sale of this coal end up?....O.K., the Earl of Balcarres made a few bob, built a big house which he subsequently ceded to the people of Wigan, which, rather surprisingly, appears to have ended up back in private hands again, more or less, but let's not go there at this juncture eh?....In 1948 I think it was, the government stepped in and nationalised the mining industry, but given that coal, since the onset of the industrial revolution at any rate has always been such a vital commodity, both in peace as well as in wartime, and given that mining was one of the reserved occupations during the war, this brings me to my second question.... why wait until after the cessation of hostilities before implementing nationalisation? The Etonian old boys network at work possibly? No, they wouldn't manipulate this country's assets for their own personal gain surely?......Would they?....A mere forty years later, this country largely having been rebuilt, the mining industry was hastily and unceremoniously dismantled, save for a few of the more profitable pits which were sold back to the private sector at car boot prices....is it me, or does there appear to be a pattern emerging here?, surely not........maybe it's just my natural cynicism kicking in.....or maybe it's a case of...

I'll say this much for the wealthy and privileged aristocracy though, even though it all came about by accident, it weren't for the fact that Haigh hall and its grounds had been in private ownership all those years ago, we would probably now all have the option of taking the dog for an exquisitely pleasurable stroll through a monstrous housing development.

The whizzer of Oz.

Is not life one big ironic and contradictory stroll with the dog Ozy?

Ozy , the irony of all this is Brexit itself . The death of the mining industry,
The ever growing gap between the North and the South . The gap between the rich and poor . When the mining industry was closed, did those that be , ever think where the anger of the miners and other pushed aside industries would go? Anger of such passion doesn’t go away , it waits !
Idiots like Hessletine , Blair , Kinnock , Mandy ( worst of all) who drank the fine wines , soups and free travel , with the blessings of the big house in Brussels , did they never think that one day , something was coming ?
Bells were ringing louder than Big Ben . When you plant any seed , first rule , learn its history,...where it came from. Miners ? Brexit ?
What goes around ...comes around ! That’s the poetry of life I love and live by ..