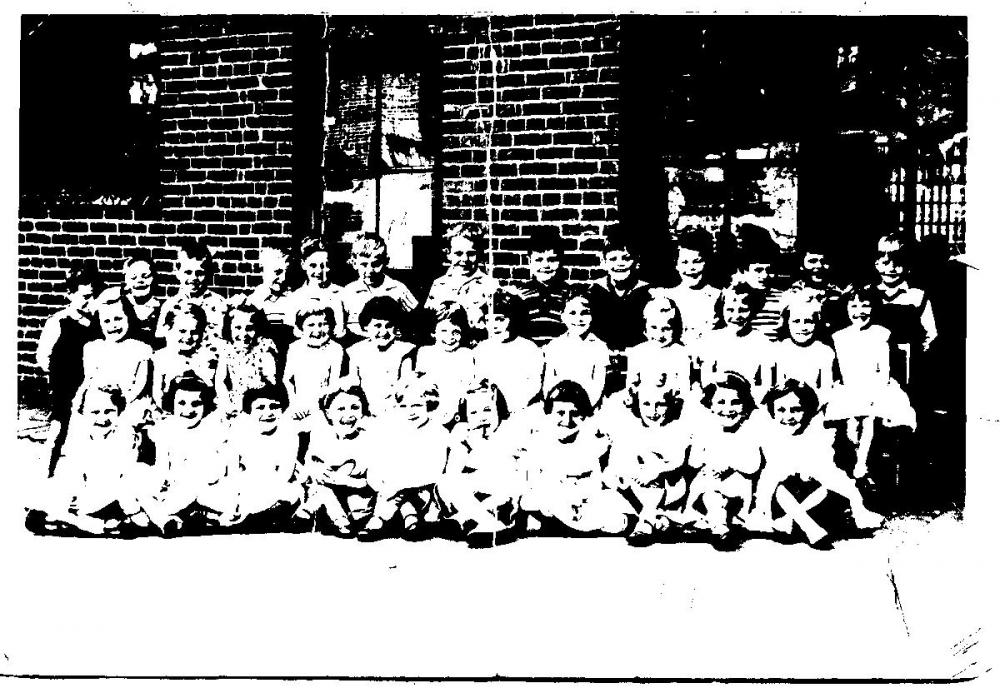 Great picture but is there any chance of getting it any clearer? If you are around 52 now, you could be on here.I do not remember this picture but I can see myself on it. I know who will probably be on here, only a few I can recognise but the list of maybe's are, Jean Turner, Ann Edwards, Sandra Fields, Pat Winstanley, Wendy Worthington, Eileen Almond, Susan Tittler, Carol Unsworth, Margaret Birchall,June Taylor,Jocelyn Hibbert, Janet Ilsley, Ann Meadows, Maurice Nott, Malcom Dickenson, John Chatterley, Royce Banks, Robert Higham, Neil Thomson, John Goulding, Kenneth Blakely, Ian Bithell, Alan Fairclough. Anymore names please? I think the head teacher was Mr. Rudd and I've forgotten our form teachers name.

Brilliant. I would love to see it in its original condition. I have told Angela to take a look, the only one I see in her place of work. Wendy's been on about a re-union, that would be great.

If any one wants a copy of the photo get in touch and I will forward one to you.

Hi all John chatterley here !WOW! 1960/61 , my brother Bill Saw it and and emailed it to me .Great to see it I think the teacher for that class was Mrs Watson a women of about 57 or 58 years old .I live in Warrington now and have done so for the last 31 years but never forget your roots Iam still a season ticket holder in the west stand of the D W Stadium for the Wigan Warriors and there for all the home games .Not Seen anyone for years apart from Royce Banks .Cheers Chatt.

Hi John, really pleased you've seen this and commented, I'll email you. I've recently had a lovely visit from Sandra,(nee Fields) must be 40 years since we've seen one another. So many memories.

hi i was talking to jean turner yesterday sad time as she lost her dad last sunday .we had along catch up on people we went to school with and if we ever see any of them i told her who i still see and we said it would be a good night if we could get together with old school mates.if you are in touch with sandra fields ask her to email me as it would be good to get in touch.bye the way nice photo i saw an original the other month off kenny blakekey

hiya susan long long time since we met.met up with jean turner,sandra fields and ann edwards the other month they came to my house for a good chin wag.cant believe you live so near .i live in whelley with my other half we have 2 children and 5 grand children .hope your keeping well keep in touch

hi jean the pics u sent of u n ur family were good.and hi pat yes we live near each other im top of belle green lane ive 4 sons n 6 grandchildren.im on fb who else is x

Yea Susan, I am on facebook, I can't find you though. Look for me or email me more details. Thanks.

i went that school must of be year below then that

I remember you John ..I hope you are keeping well where do you live now are you still in wigan