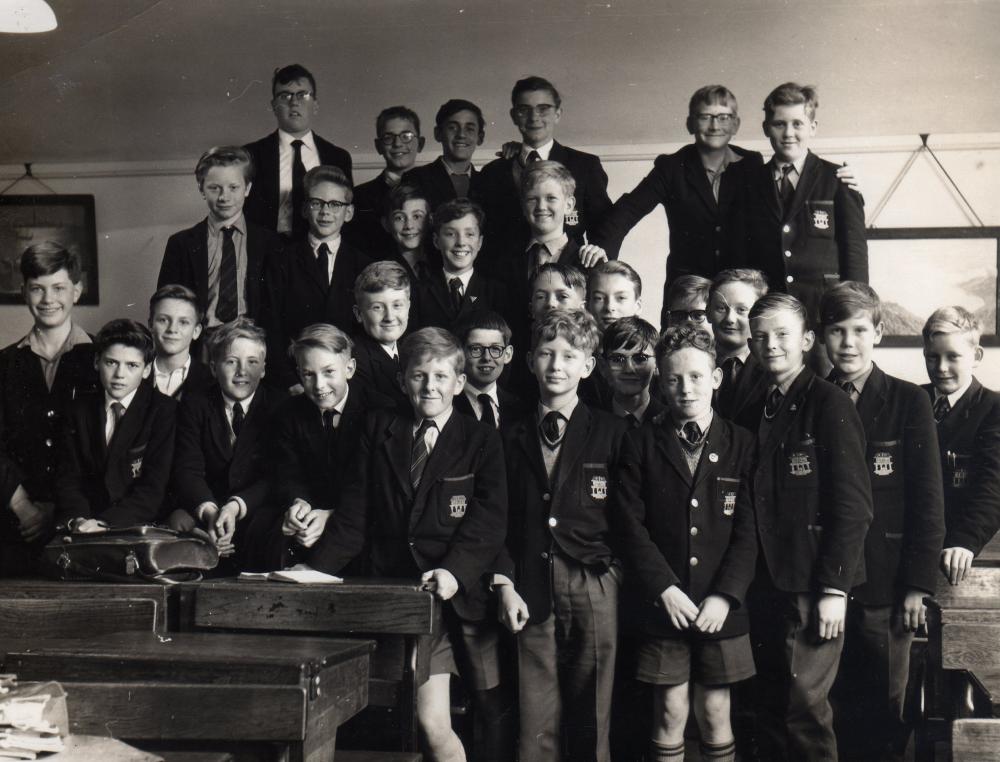 Apologies to those whose names I've forgotten or got wrong but sixty years is a long time !
I remember Peter Dunlop refusing to do Latin, Greek and Ancient History in the 3rd Year. The recommendation of the powers that be. He went on to study science at Imperial College, joined the air force and became Wing Commander Dunlop. He then flew for Virgin I believe but sadly I also believe he left us in 2016. Paul Frost is another one who left us in his early fifties.
Looking at those double desks reminds me of Paddy Gore, Latin master, sitting next to you, twisting your sideburns as an aid to memory. Happy days.
Back

This photo brings back some memories,Bill. I remember most of these names. Is it class 3A?

Excellent photo. I remember most of the names. I think it's my year group but not my form. I also have vivid memories of learning Latin with Paddy Gore. I remember how we used to stand in a semi circle around the classroom while he asked us questions. If you got it right you stayed where you were if you got it wrong he would say " nought, next" and you had to move to the bottom of the line.

Norman. The heading says Form 1 so I doubt it would be 3a, particularly as some are wearing short trousers which from memory were only allowed in the First year. Having said that some of the boys look a little bit older than 11 or 12.

Thanks to those who have added comments. On reflection, it is probably not the first year. I tend to to think we all wore short trousers in the first year and caps until at least the third year. Possibly it's second year. Paddy Gore's oral around the class test, which often extended for more than one lesson, went something like: four for a perfect answer, two if you knew the word but not the gender, one mark if you knew something and nought if you hadn't a clue. I heard a lovely story once from Harold Gaskell of Highfield cricket fame, about the annual boys versus staff cricket match. Paddy Gore went out to bat and was unfortunately out without scoring. The whole of the Mesnes Field resounded with a chorus of " Nought next !" from every boy sitting on the boundary.

well well well...the things you discover in lockdown. Well done Bill for posting this photo, and for getting so many names right. I remember every face, and most but not all the names. The lad in glasses in shade at the front is Alan Hough I think, the two lads on the far right of the front row are Alan Richardson and, farthest right, Jim Hannon who sadly succumbed to cancer a few years ago he was preparing for retirement. It was David not Billy Penningtron, he was five foot nothing but still a pretty good goalkeeper!

PS...a couple of other names...
2nd row from back, 2nd from right is Burton (sorry can't remember his first name). 3rd from right front row is David Banks. And head just showing behind Paul Frost is Peter 'Rocky' Wall, still remembered for being asked to give a vote of thanks at Speech Day and totally freezing, poor lad. Spoke to him a couple of years ago, he has lived in Holland for many years. Hope to catch up with him and and others (including you, Bill!) at the next annual WGS Old Boys Dinner which, for our sins, is organised by Jim Atherton, David Parkinson, Frank Mapson, Alan Green and myself. Get in touch if you fancy coming along!

Michael, Good to hear from you. It would be great to get in touch with you. i have often thought of trying to come to a reunion. How do I contact you ?

Great to hear from you too Bill. Would be lovely to catch up again when we can. And you would be greatly welcome at our annual dinner. If you send me an email via wigangrammar1597@gmail.com I will get in touch.

Any other old boys who would like to catch up with old mates at the annual dinner, please do the same!