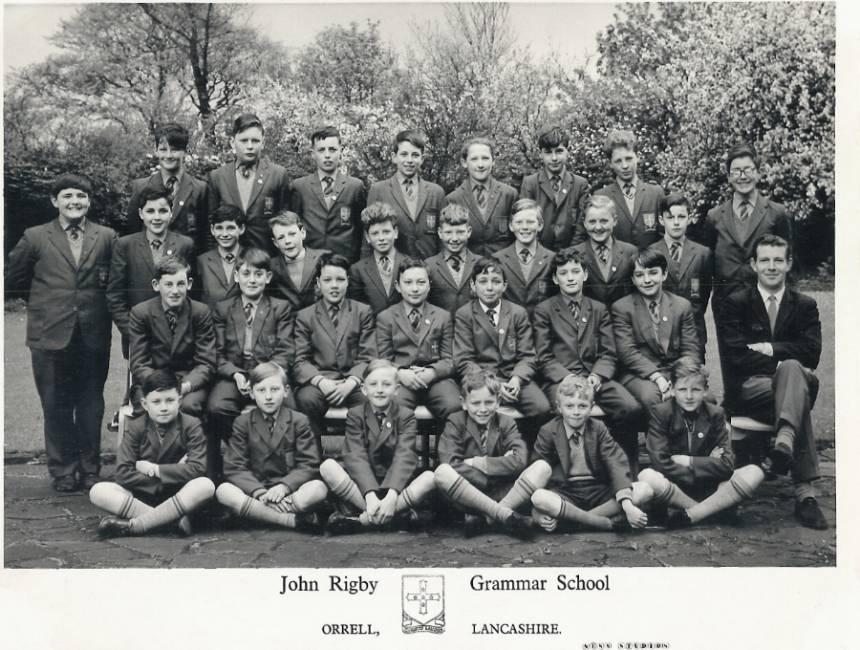 Memory's a bit sketchy after 40 years but here's who I think they all are....

i was in Class 1A same year dont know them all but a couple are front row far right Martin Morris next to him Vincent Ferran,hope this helps

Tony Corcoran next to John Moore

My dad is Geoff Taylor, he is seated next to you. I showed him this photo the other day. He remembers you and some of the front row. You can contact me via email if you wish. he now lives in Darlington, County Durham.

My brother is Vincent Ferran on the front row , how could I get a copy of this photo can anyone tell me?

I was in 1A also, same year. Back row 3rd left is Melvyn Risbin, front row 2nd left Stephen Byron

Anyone remember tony Pennington from golborne

It was sad news when I heard that, earlier this year, the teacher Mr Bagshaw died. I saw him as one of the good teachers.You might have seen some of his publications and videos he produced in his later years including the "vox pop"video of former pupils - with plenty of marvellous anecdotes about life at the school in the 1960's.

Very sad the death of Paul Bagshaw.I was at his funeral,he was a very nice man and made my early days at John Rigby very good.

I recently watched again the video produced by Paul Bagshaw of the Grammar School in the 1960's. One of the stars in that production of 2002 was a very distinguished looking Jack Knowles!

The boy front row, third left, is Alan Watkinson. Like me, in those days, he was quiet but hopefully survived the harsh regime of the Christian Brothers. I am now in Milton Keynes and happy to hear from classmates, especially Peter Young and Geoff Taylor.
cboyle5551@btinternet.com.

Hello Chris. Not looked at this site for a long time. Not seen anyone apart from Jack Knowles and not seen him for over 15 years. Remember you used to live in Billinge Road Pemberton, I believe one of my great aunties used to know you and saw a picture of you in Wigan Observer. Lived in Standish now for 34 years. Good to know you are happy in MK. David Riley.

Sad, just seen that Paul Fairhurst died on the 22nd December 19. He is not on this picture but was scrum half on the rugby team as were many others on this picture. Seams like yesterday.

Very sad to hear of Paul Fairhurst passing in December. I played alongside Paul for the rugby team; he was a great scrum half and a really tough competitor [house games were hard matches back then!]. RIP Paul.