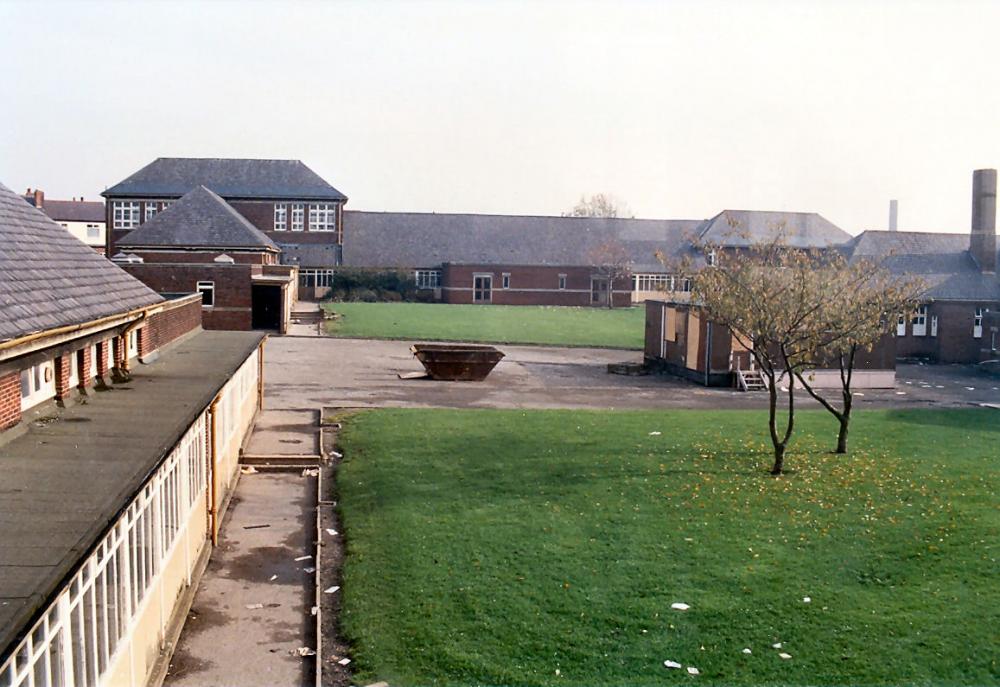 From Ted Wards room
Photo: Geoff Williams
Views: 10,478
Item #: 14599
Taken days before the school closed. I have more of this type of pic if anyone wants them uploaded
Back

Would love to see any more pic's that you have,I attended Gidlow until 1977.

I attended Gidlow 1960-64 but havent any pics of pupils unfortunately, but will put more pics of the school soon

Is this the same Geoff Williams from Wellfield Rd and Knowsley Rd.

The very same, how are you doin Graham?

I think it was an overflow classroom, if you look closely to the left of the building the sundial is there, it now proudly is one of my possesions

Very well thanks, our Allan n Julie will enjoy looking at the Gig photos

I rememebr Ted Ward very well. He was a very good physics teacher on a practical level. Is he still with us?

Hi from Aus Geoff,
I went to Gidlow from 61-end 0f 63 and am anxious to contact anyone from that time . My favourite school years were there Mrs Lowe was the headmistress then. Email me if you can help regards jeey

Perhaps for Philip Lester I should have put PETER Lester.

By the way I am David William Hull a Gidlow boy between 1960 & 1965. Yes that’s 5 years not
4 as I was along with 8 others a member of the first 5th year at Gidlow Secondary Modern.

The teachers involved called us ‘Guinea Pigs’ as they themselves were learning at the same time as we where. This further education 5th year class was a new venture for all
concerned at the school for both students & staff alike.

All the staff as I remember were during this period very kind & hard working.

The goal was to obtain passes in the U.L.C.I. exam in the following levels PASS, CREDIT or DISTINCTION & hopefully not the FAIL level.

These are the ones I David Hull can recall with recent help from Geoff Williams.

Thanks for the names Baytree Teachers& Gidlow Boys I have bumped into 1or2 who have known me but I have not been able to put a name to a face its been along time! I wounder were they all are?Steve Calder My twin brother emigrated to Australia 40years ago, just over 2 years to go and I will be drawing my old age pension frightning! all the best Dave Calder

"These are the ones I David Hull can recall with recent help from Geoff Williams.

I knew a David Markey, any relation ? or one and the same? David Lomax, Dennis Bamber Billy Grundy A boy named Horrobin, not sure of first name, Matthew Garside ,I am sure more names will come if I think harder.

Hi John just reading your last comments,i was at Gidlow same time,but in a different class. I can remember Joe Horrobin,Derek&David Yeats,Frank winstanley,David Mathews,David Hilton,? Phoenix.I have got some old video of the school if your interested.

remember giddlow well i was there in 70s.left in 71remember ted room was cained there a few times .remember wacking it and going to robdennets house to watch england and westgermany in world cup.we lost and day later we was called in teds room .thay found out and we all had 10 on each hand .remember the lads who was withme ,jonnyswift,martingrundy.rowlycarter,bob bertwistle johnny hulse right tearways eh .the last year i was there i was in class 4b and o wat a tail that was lol ,

Was in same classs as rob and johnny all 4 years

hi i was there to allong with joe leach, roy clarke, willy peach, jeff cowley, stephen coats, jimmy bentley,we made 8mm movies in ted wards class remember getting the cain off sammy topping for blowing saw dust in joe leaches eyes i negotiated 6 of the best down to 2 still bloody hurt though

has any one got fotos ov the best team ever to play for gidlow , we only lost 4 games tried to find a picture when we won the lancshire evening post shield , some of the team ,was grog tayler , sammy monks, bish,lennox,jackson,carl, cockiom? jack gregory ,cant remember any more, so long ago now, all the teachers named was there when i was , made a film it was called bar 6 the chocolate film, another was gamberling on the school yard,i would love to know were it went

Baytree David Markey was indeed a relation of John Markey he was his younger brother. Sadly John died some years ago in Bristol.

i was there in there till 1971 was in b class last year remember most of it hehehehe wat a blast dropped on old pal and he said he got a video ofthe old school ,hope im on it we made one called detension .never seen it with bob bertwistle,martfnigrundy,rowland carter .john hulse,and the rest wat a bunch of tearaways lol

David I not sure if that is our don in photo I can remember two names from. School they are Jackie Ryan and Peter Thompson

David I second though it is our Don

David I second though it is our Don

I am John Powell,I was in the B stream,prevented from 5th form because of dad wanting me to get an apprenticeship. seems irrelevent now as I near retirement. Such memories are really more special,now that classmates are passing away or have emigrated,as have I I would love to see any photos or hear any news of past pupils. and. the school.

Just stumbled across this site after a bit of web surfing. Attended the school and a lot of the staff names are very familiar.

Intrigued to know what has happened to some of my class mates from that time - David Parker, Barry Hunter, David Morris, Frank Robinson, etc.

My dad is called Joseph horrobin.
Big family off them from beech grove in beech hill. Think all 12 of them went Gidlow school.